The ruins kept dragging on to the north. The land around them was flat and bare, so the only thing that stood between the travellers and a horizon here was a thin veil of dust raised by the chargas’ paws from the ground.

Kangassk noticed that at some point the ground began to slope in the direction of the Region’s centre. He soon understood why: the ground they walked on was in fact a bottom of a huge crater. The ruins there no longer looked like broken teeth sticking out of the ground, they were just piles of crushed stone and dust scattered along the way and formed a circular rampart by the crater’s centre. To climb it, Vlada and Kan had to dismount from their chargas and go on foot. The view from the top of the rampart was so alien it sent shivers down Kan’s back. In the former centre of the ancient catastrophic explosion stood a huge black cube, perfectly smooth, undamaged, and free from dust. A lonely man sat on the cube, his cloaked head bowed, his shoulders slouched. He leaned his heavily worn staff against one of the cube’s polished black walls. Silvered by the young moon, the staff shone through the night like a fantasy mage’s weapon would.

“Hello, Sereg,” she sighed. The sadness in her voice was so deep that even Kangassk who had no idea what it was about could feel it too. 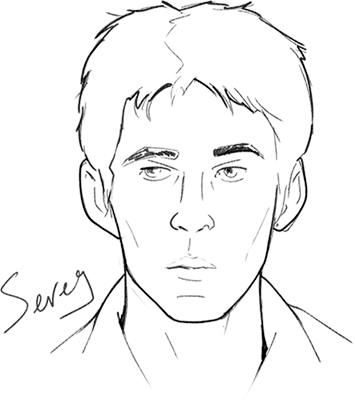 The man named Sereg removed his hood and stood up. He was so tall he towered above Vlada and Kan like a mountain but his physique didn’t match his height: Sereg was so thin he looked starved. Kan could not guess his age. The stranger’s hair was grey, either with age or with dust, there were dark shadows under his eyes as if he had been running or fighting for a long time. One moment his face seemed young yet but the next moment it didn’t, not after your eyes met his.

Now, when Vlada stood beside this strange man, she looked way older than her young face suggested as well.

Sereg had no sword on him, just the steel bound staff, no doubt as heavy as a solid rock. Kangassk, a smith’s apprentice, knew the very moment he saw that thing that it was no mere walking stick but a weapon as deadly as a sword in the right hands.

“I came through the Chasm,” said Sereg in a hollow voice.

Sereg and Vlada sat at the edge of the cube. They paid no attention to Kangassk at all, he just stood there, as still as a statue, his hands resting on the chargas’ necks.

“Vlada,” he said in a grave voice, “it’s not easy for me to say this… At first, after my journal had disappeared I didn’t think much of it. Yes, I put an incineration spell on the journal no thief would survive. But I remembered showing it to Orion and thought that maybe after I had removed the spell back then I just forgot to restore it…”

Random stuff: Internet is a lonely place. Please, leave me a comment. No registration needed.
Random stuff: After you've read the page, scroll down to see the comments :)
Random stuff: I wrote "Cold Obsidian" when I was 20. Translating it into English has been my dream since.
Random stuff: "Obsidian Trilogy" is the reason I decided to learn to draw. I was too poor to pay an artist but wanted my novels to have beautiful covers.
Random stuff: The biggest obstacle in translating my novels into English was poetry. The poems included in my stories couldn't be removed and I couldn't translate them. Without Alan Jackson' help, there wouldn't be the translation of OT. (English poetry is still a mystery to me).
Random stuff: There is a comment section below every chapter. Take a look :) Even when no one else comments there, I always do.
Random stuff: I update the site as soon as a new illustration is ready. If you want to binge-read the story, you can buy an ebook ($1) or join my Patreon.
Random stuff: All my books are on Goodreads. If you like them, please add them to your shelves.
Random stuff: The banners below the comment section belong to ComicAd (a network of indie creators). They can help you find more interesting things to read.
Random stuff: Obsidian Trilogy is currently my side project. My main progect is Gifts of wandering ice (a sci-fi webcomic 750+ pages long)
Random stuff: I didn't simply translate the novel into English, I rewrote and added a lot to make the story better. Can't help feeling proud.
Random stuff: A new reader? Or maybe a long-time lurker? Scroll down to the comments section and say hi! No registration needed.
Random stuff: Since Obsidian Trilogy is an illustrated story, you can both vote for it at TopWebComics and boost it at TopWebFiction (no registration needed). Either way, it's a huge help!
Random stuff: Every story begins with a spark: a small idea in the author's imagination. For "Cold Obsidian" it was a dream where a warrior woman was shopping for weapons and chose one made by an apprentice, not a master.
Random stuff: I wrote "Cold Obsidian" when I was 20 and rewrote it while I was translating it into English at the age of 36. Why rewrite it at all? Because there were too many scenes that made me exclaim: oh my! What was I thinking! It doesn't make sense at all! Scratch it!
Random stuff: The name Kangassk was inspired by Kangaxx. If you played Baldur's Gate 2, you've sure met that guy.
Random stuff: I made the first illustrations for "Cold Obsidian" by hand but later moved to Krita because drawing there was faster and easier.
Random stuff: I'm new to illustrating novels, so I'm experimenting a lot and would love to hear what you think of the different styles I'm testing.
3rd Nov 2020, 3:06 PM in Book 1. COLD OBSIDIAN

I went through a lot of crater references for this drawing. Looked for something big enough to be impressive but not steep enough to make the descent there too uncomfortable.
Post a Comment
Comic Rocket ad exchange: