End of book one

Vlada’s Sun Tower was nothing like Sereg’s Grey Tower when it came to the layout of rooms and corridors but their transporter panels were nearly identical. All Kangassk needed to do to get to the dining hall was to press a certain button on the crystal terminal. It bore a familiar spoon-like symbol and, yes, it did take him where he thought it would.

Minutes later, Kan joined the star children at the dining table. Orion the human and, surprisingly, Ainan Smalt were here too.

Poor Ainan looked like he had no idea why he had been invited. Kangassk felt just as awkward and out of place but for a different reason: thoughts of Edna and her sudden disappearance were heavy on his mind.

“Ainan, any news of the girl that had given us the poison recipe?” Orion the son of stars turned to the young mage.

“Poor child…” said Aster with a sigh. “She still thought we would hurt her...”

Kangassk took a long sip from his cup, the only thing he could hide his face behind at the moment.

“Alas...” Orion shrugged. “But it doesn’t matter. She was a member of the team our thief considered expendable. I doubt that she knew much. We already have our witness and all the clues we need.”

Orion, Meralli’s descendant, waved his hand, announcing that he was the person in question.

“Lord Orion, lady Aster, I beg your pardon…” That was Ainan. “I’m sorry to interrupt you but I thought that it might be important.”

“Well, on my way here, I heard people in the city speak about a dragon someone saw this morning. They describe it as an emerald-green creature about the size of a man.”

Silence followed his words, promptly broken by a loud crunch when Orion the human bit into another biscuit. 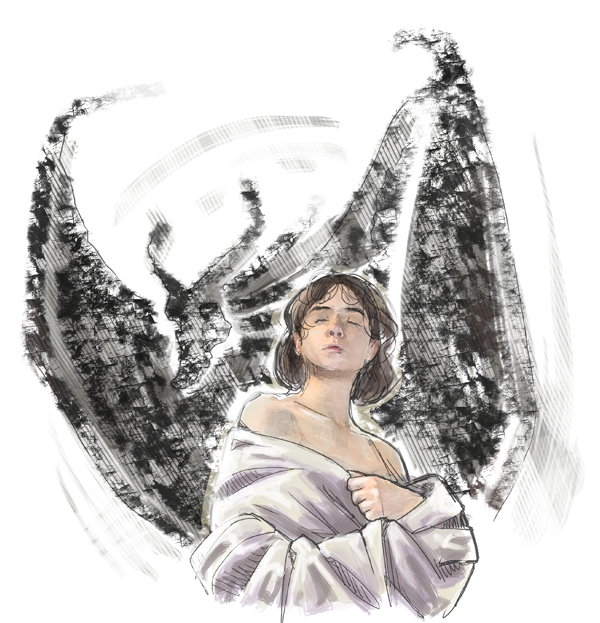 “Too many dragons…” muttered Kan from behind his cup he was still holding in both hands.

“What do you mean?” Aster turned to him, her azure eyes sparkling with curiosity.

“Yellow dragons were destroyed by Vlada’s people, the Wanderers, in my city. The vitryanik I killed took a dragon shape to fight me. Emerald dragons followed Uvel after captain Ptarmika died. And now this one… Dragons used to be a stuff of legends and now they’re everywhere. I wonder why?”

Orion the son of stars leaned back comfortably in his chair, crossed his arms on his chest, and gave Kangassk a curious look.

“I’m not a dragon expert,” he said, “but I know that dragons love anomalies of all kinds. I also see a pattern here, kid: all dragon sightings from the last twenty years have been connected to you one way or another.”

“What? Do I look like an anomaly to you?” Kangassk tried to laugh it off but couldn’t for some reason.

“No, not to me. To dragons.” Orion’s confidence in the matter remained unruffled. He turned to Ainan. “What else do people say about the dragon?” he asked.

“I heard that it had circled the Sun Tower several times before flying away.”

“Very,” wholeheartedly agreed Aster. “Damn, I wish we had time to investigate the matter! Another sentient race is trying to contact us and we must deal with this Hora Thief instead of reaching back to them!”

Kangassk’s thoughts went back to Edna again, to her escape, to the words she had said to him. He threw everything - all his guesses, all his doubts - at his cold obsidian, hoping for denial or maybe indifferent silence at least, but the soothstone was relentless in confirming the connection.

Yes, Edna was one of the dragon people that captain Ptarmika had told her grandson about. And, yes, her interest in Kangassk - the very reason why she helped him, why she liked him - had the same source as did the yellow dragons’ interest in Aren-Castell.

But why had she come to him last night? Why would she ever do such a cruel thing to herself? And to him as well... That was a puzzle Kangassk could not even touch.

Thinking of it, he lost track of the conversation at the table. When he realized it, he felt that it was time for him to start paying attention unless he wanted to be asked awkward questions.

“Orion,” the son of stars addressed his mortal namesake, “you mentioned that your master’s name was Kangassk. Was this thief, Max-Milian, his apprentice as well?”

“What? No-ho-ho!” the mortal Orion laughed. “If we count you, Del-Emer,” he pointed at Kan,” I know eleven Kangassks. Five of them are women, by the way. Sainar just gives that stupid name to all his kids…” That said, he bit into another biscuit.

The question, both sudden and gravely serious, had nearly made Ziga’s descendant choke on his treat.

“Your father, of course!” he said, astonished. “Don’t you tell me you don’t know…”

“Well, his full name is Sainarnemershghan Saidonatgarlyn. He also goes by a pen name Hansai Donal...”

“No way…” said the son of stars with a burst of nervous, unhappy laughter. “That’s the man whose heathenish scribblings our poor Sereg hates so much. Well, well, Omnis is a small world indeed…”

“Okaaaaay…” the mortal Orion resolutely pushed the bowl with biscuits away, ready for a serious talk. “Looks like I’ll have to tell you all a very long story…”

Random stuff: Internet is a lonely place. Please, leave me a comment. No registration needed.
Random stuff: After you've read the page, scroll down to see the comments :)
Random stuff: I wrote "Cold Obsidian" when I was 20. Translating it into English has been my dream since.
Random stuff: "Obsidian Trilogy" is the reason I decided to learn to draw. I was too poor to pay an artist but wanted my novels to have beautiful covers.
Random stuff: The biggest obstacle in translating my novels into English was poetry. The poems included in my stories couldn't be removed and I couldn't translate them. Without Alan Jackson' help, there wouldn't be the translation of OT. (English poetry is still a mystery to me).
Random stuff: There is a comment section below every chapter. Take a look :) Even when no one else comments there, I always do.
Random stuff: I update the site as soon as a new illustration is ready. If you want to binge-read the story, you can buy an ebook ($1) or join my Patreon.
Random stuff: All my books are on Goodreads. If you like them, please add them to your shelves.
Random stuff: The banners below the comment section belong to ComicAd (a network of indie creators). They can help you find more interesting things to read.
Random stuff: Obsidian Trilogy is currently my side project. My main progect is Gifts of wandering ice (a sci-fi webcomic 750+ pages long)
Random stuff: I didn't simply translate the novel into English, I rewrote and added a lot to make the story better. Can't help feeling proud.
Random stuff: A new reader? Or maybe a long-time lurker? Scroll down to the comments section and say hi! No registration needed.
Random stuff: Since Obsidian Trilogy is an illustrated story, you can both vote for it at TopWebComics and boost it at TopWebFiction (no registration needed). Either way, it's a huge help!
Random stuff: Every story begins with a spark: a small idea in the author's imagination. For "Cold Obsidian" it was a dream where a warrior woman was shopping for weapons and chose one made by an apprentice, not a master.
Random stuff: I wrote "Cold Obsidian" when I was 20 and rewrote it while I was translating it into English at the age of 36. Why rewrite it at all? Because there were too many scenes that made me exclaim: oh my! What was I thinking! It doesn't make sense at all! Scratch it!
Random stuff: The name Kangassk was inspired by Kangaxx. If you played Baldur's Gate 2, you've sure met that guy.
Random stuff: I made the first illustrations for "Cold Obsidian" by hand but later moved to Krita because drawing there was faster and easier.
Random stuff: I'm new to illustrating novels, so I'm experimenting a lot and would love to hear what you think of the different styles I'm testing.
7th Nov 2021, 7:25 PM

Yay! Book one is published! Now you can binge-read it if you wish.
Please drop me a line or two if you're reading CO :)

PS: The other books of the Trilogy - "Hot Obsidian" and "Smoky Obsidian" are finished, just not translated into English yet (HO is currently 60% translated). Also, they need covers and illustrations.
Will do my best not to keep you waiting for too long.
Join my Patreon if you want to read "Hot Obsidian" before it appears on ComicFury (you will also get access to all my webcomic extras and early updates).
User comments:
Post a Comment
dani, the geek (Guest) 8th Nov 2021, 1:39 PM
edit delete reply
hi!
i'm reading, honest! i do have one question about today's chapter... are those Biscuits that the human Orion is eating American or British style?
%-)

I don't know about the biscuits. I have tried neither American nor British ones, so I can't say which ones would be a better match here. The book was originally written in Russian, by a very young me, so all Omnisian treats resembled what I was familiar with. Alas, it was a long time ago, so I can't be sure which biscuits I was thinking about while writing this chapter. My best guess is this recipe (because it was my favourite): https://www.russianfood.com/recipes/recipe.php?rid=140985
Scott Kennedy (Guest) 5th Mar 2022, 10:43 AM
edit delete reply
Those look really tasty, whether they are baked or deep fried, I can't tell from the photograph, and I don't speak Russian so I can't follow the instructions.

They look like what Americans would call a biscuit, bread like chewy and usually rather sweet.
British biscuits or what Americans call crackers are flat and baked until they are crisp and will crunch when you bite into them often served with soup or with cheese or sliced meats on them as appetizers.

I honestly thought you were referring to crackers as Orion the man kept crunching in to them, and was surprised with the recipe you provided, as they don't look like they would crunch so much as be chewy. But they look like they may well have a crunchy coating if they were deep fried rather then baked.
Mild 5th Mar 2022, 12:04 PM
edit delete reply

They are really tasty indeed!
I translated the instructions for you:
https://docs.google.com/document/d/1e52nAaT1kCKdJ3N2fObMvx71_afMEOSZsp-hV8uw-_M/edit?usp=sharing
Give them a go :)
Scott Kennedy (Guest) 5th Mar 2022, 10:35 AM
edit delete reply
All caught up, loved it! Can't wait for the next chapter.

So you are really Russian (or at least a native Russian speaker) and learned English as a second language then translated?

I only ask because your English is better then at least half my fellow Americans.
Mild 5th Mar 2022, 11:59 AM
edit delete reply

Thanks for reading (and the praise!).
Yes, I learned English as a second language. My friend (Alan Jackson, he translated the poems in my novels) helped me a lot here. He still corrects me from time to time when I make mistakes.
I'm currently close to finishing the translation of the next book of the trilogy.
The Doodler 4th May 2022, 1:38 AM
edit delete reply

I need to catch up! And seconded about being able to write in a second language. I need to get a Boosty account, I think.
Mild 5th May 2022, 6:30 PM
edit delete reply

Wow! Don't be shy to ask me questions about Boosty if you encounter any problems there.
Post a Comment
Comic Rocket ad exchange: