The morning brought sounds of the city waking up and seabirds squabbling on the windowsill, bright light unhindered by curtains, and cool breeze from the open window. Memories of the night were blurry and foggy in Kangassk’s brain just as a dream should be. Only it wasn’t a dream: when he woke up, Edna was still here, in his bed, cosily curled up among the tumbled sheets. In her relaxed state, she no longer maintained the illusion of being Kan’s peer; she looked like her real self again: a scrawny, flat-chested teenage girl with messy hair. 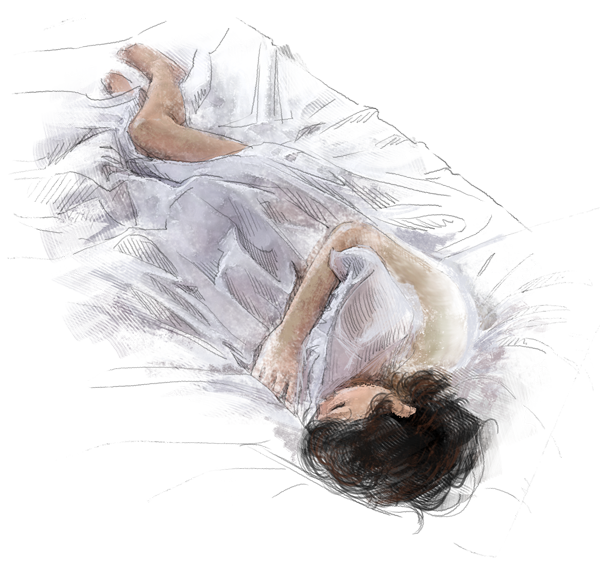 Kan felt his heart sink. The more he recalled that night’s events, the worse he felt. He had joined a particular group his mother hated the most: men who don’t think of consequences, men who don’t care about the women they sleep with, men who ruin lives for their primitive desires’ sake… Just like his father did.

What was he to do now… He should have said no…

With a helpless, stifled moan, Kangassk buried his face into the pillow.

“Good morning,” he heard Edna say and felt her slender fingers run through his hair again.

“Good morning,” Kan echoed her words. He didn’t know what else to say or do.

She understood. That was obvious.

“Don’t worry, my love,” she said. “I will leave you very soon and you will never see me again.”

That was heartbreaking. And so wrong that it made Kan go from miserable to angry in a split second.

“Edna, no!” he shouted. “I don’t want you to go! I won't…” Someone knocked at the door at this very moment.

Kangassk tried to ignore the knocking. But whoever it was behind the door, they were persistent. Then the knocking stopped; someone was banging at the door now. Kangassk muttered a curse.

“I’ll be back in a minute,” he said to Edna and added, “Everything will be alright. I promise.”

Kangassk had neither time nor desire to put on his dirty clothes, so he just wrapped a towel around his waist before opening the door. Orion the human was behind it, dressed in a new, crisply clean set of clothes and no longer resembling a pirate at all.

“Here you are! Alive and kicking!” he exclaimed when he saw Kan. “Wow, pal, you sleep like a rock! Those poor servants have been trying to deliver you food and clothes for hours. Had to give them a hand. Here’s your stuff.” He handed a bundle of fresh clothes to Kangassk. “No food, sorry. The biscuits were too tasty, I couldn’t resist. Nommed them all.”

All of a sudden, Orion stopped chattering and sniffed at the air.

“You smell real nice, pal,” he said with a crooked grin. “Lavender and cinnamon, huh? Had a girl guest last night? Is she still here? Man, I envy you! On your very first night at the Tower... Well, have fun! See you at lunch, Apprentice!”

Kangassk slammed the door behind Orion and cursed, quietly but with passion. His emotions under control again, he turned back to Edna.

The bed was empty. The curtains were dancing in the wind. And there were no birds on the windowsill.

A horrible realization dawned upon Kangassk. He dropped the clothes bundle and ran to the window, half expecting to see the girl’s dead body at the foot of the Sun Tower.

But Edna was nowhere to be seen. Just gone. Like a dream.

Random stuff: Internet is a lonely place. Please, leave me a comment. No registration needed.
Random stuff: After you've read the page, scroll down to see the comments :)
Random stuff: I wrote "Cold Obsidian" when I was 20. Translating it into English has been my dream since.
Random stuff: "Obsidian Trilogy" is the reason I decided to learn to draw. I was too poor to pay an artist but wanted my novels to have beautiful covers.
Random stuff: The biggest obstacle in translating my novels into English was poetry. The poems included in my stories couldn't be removed and I couldn't translate them. Without Alan Jackson' help, there wouldn't be the translation of OT. (English poetry is still a mystery to me).
Random stuff: There is a comment section below every chapter. Take a look :) Even when no one else comments there, I always do.
Random stuff: I update the site as soon as a new illustration is ready. If you want to binge-read the story, you can buy an ebook ($1) or join my Patreon.
Random stuff: All my books are on Goodreads. If you like them, please add them to your shelves.
Random stuff: The banners below the comment section belong to ComicAd (a network of indie creators). They can help you find more interesting things to read.
Random stuff: Obsidian Trilogy is currently my side project. My main progect is Gifts of wandering ice (a sci-fi webcomic 750+ pages long)
Random stuff: I didn't simply translate the novel into English, I rewrote and added a lot to make the story better. Can't help feeling proud.
Random stuff: A new reader? Or maybe a long-time lurker? Scroll down to the comments section and say hi! No registration needed.
Random stuff: Since Obsidian Trilogy is an illustrated story, you can both vote for it at TopWebComics and boost it at TopWebFiction (no registration needed). Either way, it's a huge help!
Random stuff: Every story begins with a spark: a small idea in the author's imagination. For "Cold Obsidian" it was a dream where a warrior woman was shopping for weapons and chose one made by an apprentice, not a master.
Random stuff: I wrote "Cold Obsidian" when I was 20 and rewrote it while I was translating it into English at the age of 36. Why rewrite it at all? Because there were too many scenes that made me exclaim: oh my! What was I thinking! It doesn't make sense at all! Scratch it!
Random stuff: The name Kangassk was inspired by Kangaxx. If you played Baldur's Gate 2, you've sure met that guy.
Random stuff: I made the first illustrations for "Cold Obsidian" by hand but later moved to Krita because drawing there was faster and easier.
Random stuff: I'm new to illustrating novels, so I'm experimenting a lot and would love to hear what you think of the different styles I'm testing.
5th Nov 2021, 12:25 PM

Consequences, here we go! Props to Kan, though: he was adamant about taking the responsibility.
Post a Comment
Comic Rocket ad exchange: