Chapter 20. Of dragons and dreams

Chapter 20. Of dragons and dreams 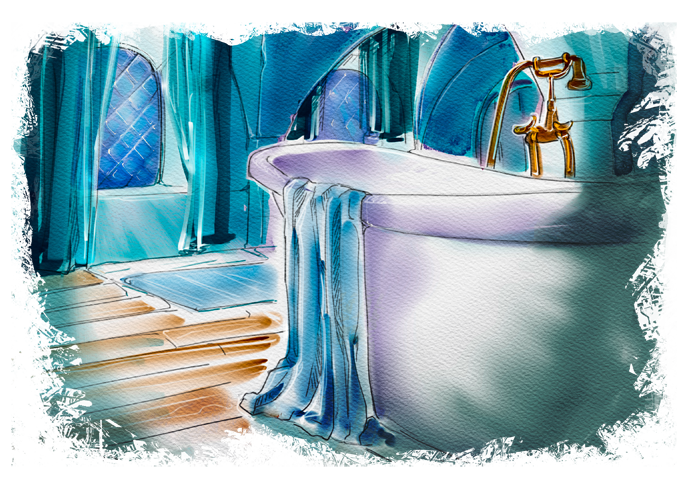 Someone was gently ruffling Kangassk’s hair. What a way to wake up!

Half-awake, he kept his eyes closed and his breath deep and slow as if he were still fast asleep. There was no danger (his cold obsidian would have warned him otherwise), just serene silence with a faint echo of faraway music only a soothsayer could hear.

The hand - that small, gentle, unfamiliar hand - left Kan’s hair alone and brushed against his cheek, his lips, his scarred brow…

“I know you’re awake,” he heard a soft whisper followed by hushed giggling. "You may stop pretending now."

Kangassk opened his eyes. It was night still. Thin curtains were dancing in the breeze coming in from the open window. He didn’t remember opening it...

It was a question, not a statement, for a reason. The girl sitting beside Kan on his bed looked several years older than the little thief, not a scrawny teen but a beautiful young woman (who wore nothing but a thin nightgown at that!). Her hair was longer. Her voice was deeper, more mature. If it weren’t for the soothstone’s reassurance, Kangassk would have thought his unexpected visitor to be a different person. But it was Edna. Just… how?

“Yes. I’m still the Edna from the closet,” she smiled.

“A good dinner and a hot bath can do wonders to a tired girl,” Edna shrugged. And, according to the cold obsidian, she didn’t even lie! Also, there was not even the slightest trace of magic in the air. Kangassk was no great mage but he would detect a Charm spell in a heartbeat.

He sat in his bed. His own bath, now cold, was in his field of vision now. His clothes, ruined by sea salt, sweat, and blood, were still where he had left them: on the floor. Kangassk was naked under his blanket and, with the girl in the room, it was embarrassing as hell.

“Edna, why are you here? How did you get past the guards?” he asked two questions at once, stumbling at every word, in a desperate attempt to distract himself from the stupid situation he found himself in.

“I didn’t have to get past the guards.” Edna touched his cheek again; the cheek answered the touch with a burning, almost painful blush. “No one is guarding my window.” She nodded at the dancing curtains. “I couldn’t sleep, so I decided to go for a walk. The night is beautiful.”

“But… it’s a long fall…” Kangassk looked at the window, wide-eyed. “And the wall is as smooth as glass…”

“I’m not afraid of heights. And of glassy walls,” said Edna. There wasn’t even a tinge of pride in her voice, as if she were describing something trivial.

Her slender hands now rested on Kan’s shoulders and she sat so close to him that he could feel her breath on his face.

“About your other question: why I’m here,” she said. “I’m here because I like you, Kangassk Del-Emer. I could even come to love you, given time. But time is what mortals never have… So what will you say now? Will you send me back to my room? Or do you want me to stay?”

This girl was in the enemy’s team! She tried to murder him! She could change her appearance on a whim, without magic! She climbed glassy walls, for sanity’s sake! But she was a dream come true, she was what a Kuldaganian freak could never ever hope to have…

Kangassk couldn’t bring himself to say no to that. He tried, several times, but failed.

“Stay with me,” was his final answer, so ardent and painful that he felt tears suddenly blur his vision. “Please…”

Edna silenced him with a kiss. And she did stay…

Random stuff: Internet is a lonely place. Please, leave me a comment. No registration needed.
Random stuff: After you've read the page, scroll down to see the comments :)
Random stuff: I wrote "Cold Obsidian" when I was 20. Translating it into English has been my dream since.
Random stuff: "Obsidian Trilogy" is the reason I decided to learn to draw. I was too poor to pay an artist but wanted my novels to have beautiful covers.
Random stuff: The biggest obstacle in translating my novels into English was poetry. The poems included in my stories couldn't be removed and I couldn't translate them. Without Alan Jackson' help, there wouldn't be the translation of OT. (English poetry is still a mystery to me).
Random stuff: There is a comment section below every chapter. Take a look :) Even when no one else comments there, I always do.
Random stuff: I update the site as soon as a new illustration is ready. If you want to binge-read the story, you can buy an ebook ($1) or join my Patreon.
Random stuff: All my books are on Goodreads. If you like them, please add them to your shelves.
Random stuff: The banners below the comment section belong to ComicAd (a network of indie creators). They can help you find more interesting things to read.
Random stuff: Obsidian Trilogy is currently my side project. My main progect is Gifts of wandering ice (a sci-fi webcomic 750+ pages long)
Random stuff: I didn't simply translate the novel into English, I rewrote and added a lot to make the story better. Can't help feeling proud.
Random stuff: A new reader? Or maybe a long-time lurker? Scroll down to the comments section and say hi! No registration needed.
Random stuff: Since Obsidian Trilogy is an illustrated story, you can both vote for it at TopWebComics and boost it at TopWebFiction (no registration needed). Either way, it's a huge help!
Random stuff: Every story begins with a spark: a small idea in the author's imagination. For "Cold Obsidian" it was a dream where a warrior woman was shopping for weapons and chose one made by an apprentice, not a master.
Random stuff: I wrote "Cold Obsidian" when I was 20 and rewrote it while I was translating it into English at the age of 36. Why rewrite it at all? Because there were too many scenes that made me exclaim: oh my! What was I thinking! It doesn't make sense at all! Scratch it!
Random stuff: The name Kangassk was inspired by Kangaxx. If you played Baldur's Gate 2, you've sure met that guy.
Random stuff: I made the first illustrations for "Cold Obsidian" by hand but later moved to Krita because drawing there was faster and easier.
Random stuff: I'm new to illustrating novels, so I'm experimenting a lot and would love to hear what you think of the different styles I'm testing.
26th Oct 2021, 7:14 PM in Book 1. COLD OBSIDIAN

Kan's logical side did its best to convince him that getting intimate with that girl was a bad idea. Oh well... consequences are coming soon.
Post a Comment
Comic Rocket ad exchange: