Orion and Kangassk left the room together. There were orders to be given and matters to attend to; there was a Tower to be searched from its dungeons deep underground to its observatory among the clouds; there was the thief to be caught… but for a brief moment, everything seemed all right again and both of them could take a deep breath.

“Orion, since you’re giving orders here now, I need to ask you something,” said Kan just in time before the lucky moment was gone.

“Ask away. Anything for you.”

“It’s about the girl who was with the thieves, Edna. She gave me the recipe. In return, I promised her freedom. May I…”

“Yes,” Orion interrupted him. “Where is she?”

“The mages locked her in the closet, she’s been alone there for hours, crying. And Ainan said they had tried some serious interrogation spells on her. Please, Orion, Edna is just a child!”

“I see… I’ll tell the servants to prepare a guest room for her. There will be guards at her door but only for a while. I want her to rest and answer some questions, then she is free to go.”

“Bah! Don’t mention it. After everything you’ve done, after you’ve saved Aster, I trust your judgement.”

A promise is a promise. Kangassk returned for Edna himself, showed the girl to her room, and made sure that a bath and a dinner were prepared for her.

Kan was so tired after the long day that he spoke little and had almost left without saying goodnight. An inking sent by the cold obsidian welled up under his heart just when he was about to leave Edna’s room; he turned around and saw the girl standing there, in the middle of a wide spot of moonlight from the window, her shoulders drooping, her head down. 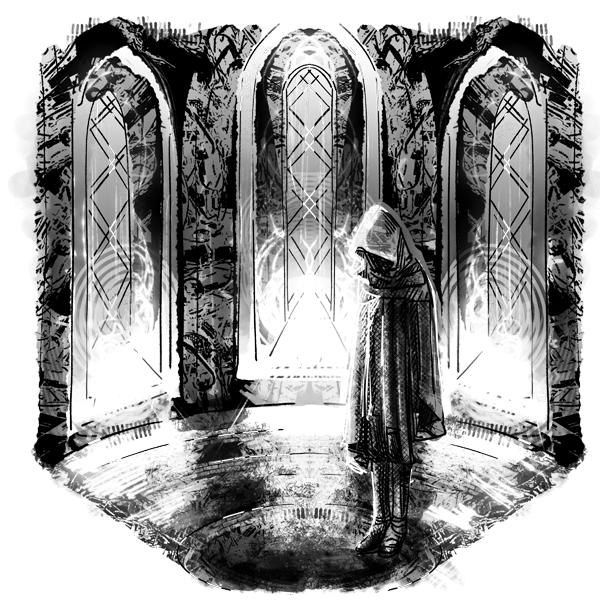 She lifted her head and looked him in the eye, a tiny, dishevelled sparrow facing an idle cat.

“You are a guest, not a prisoner here,” Kan tried to explain.

“There are still guards at the door…” she whispered.

“Yes. But tomorrow, after Orion and Aster have talked to you, you will be free to go. I swear.”

“Take a bath. Eat. Rest…” Kangassk faked the best smile he could now. “Everything will be fine!”

“It may seem so now. But tomorrow will be another day… Goodnight, Edna.”

Random stuff: Internet is a lonely place. Please, leave me a comment. No registration needed.
Random stuff: After you've read the page, scroll down to see the comments :)
Random stuff: I wrote "Cold Obsidian" when I was 20. Translating it into English has been my dream since.
Random stuff: "Obsidian Trilogy" is the reason I decided to learn to draw. I was too poor to pay an artist but wanted my novels to have beautiful covers.
Random stuff: The biggest obstacle in translating my novels into English was poetry. The poems included in my stories couldn't be removed and I couldn't translate them. Without Alan Jackson' help, there wouldn't be the translation of OT. (English poetry is still a mystery to me).
Random stuff: There is a comment section below every chapter. Take a look :) Even when no one else comments there, I always do.
Random stuff: I update the site as soon as a new illustration is ready. If you want to binge-read the story, you can buy an ebook ($1) or join my Patreon.
Random stuff: All my books are on Goodreads. If you like them, please add them to your shelves.
Random stuff: The banners below the comment section belong to ComicAd (a network of indie creators). They can help you find more interesting things to read.
Random stuff: Obsidian Trilogy is currently my side project. My main progect is Gifts of wandering ice (a sci-fi webcomic 750+ pages long)
Random stuff: I didn't simply translate the novel into English, I rewrote and added a lot to make the story better. Can't help feeling proud.
Random stuff: A new reader? Or maybe a long-time lurker? Scroll down to the comments section and say hi! No registration needed.
Random stuff: Since Obsidian Trilogy is an illustrated story, you can both vote for it at TopWebComics and boost it at TopWebFiction (no registration needed). Either way, it's a huge help!
Random stuff: Every story begins with a spark: a small idea in the author's imagination. For "Cold Obsidian" it was a dream where a warrior woman was shopping for weapons and chose one made by an apprentice, not a master.
Random stuff: I wrote "Cold Obsidian" when I was 20 and rewrote it while I was translating it into English at the age of 36. Why rewrite it at all? Because there were too many scenes that made me exclaim: oh my! What was I thinking! It doesn't make sense at all! Scratch it!
Random stuff: The name Kangassk was inspired by Kangaxx. If you played Baldur's Gate 2, you've sure met that guy.
Random stuff: I made the first illustrations for "Cold Obsidian" by hand but later moved to Krita because drawing there was faster and easier.
Random stuff: I'm new to illustrating novels, so I'm experimenting a lot and would love to hear what you think of the different styles I'm testing.
19th Oct 2021, 12:59 PM

End of chapter 19! Would love to lear from you!