They locked the room and ran back through the labyrinth of brightly lit corridors, up and down the stairs. Luckily, Ainan seemed to remember the way well.

“You’d make a great Inquisitor, Kangassk!” he said, excited. “The girl refused to talk, I heard that she even resisted several strong interrogation spells someone had tried on her…”

“She just liked him,” Orion chimed in. “You know, brown skin, emerald eyes, that cool scar… Damn, I wish I looked that exotic!”

“Oh shut up, Orion!” Kan grumbled through clenched teeth and thought, “Exotic! What a curious way to say ‘freak’, indeed!”

All three fell silent at the doorstep of Aster’s bedroom. The aura of magic was so strong there that it echoed in their minds with a sense of impenetrable doom and a primal call to run away. A magic that strong, when channelled into a healing spell, is often enough to kill a patient; the mages inside must have been desperate.

Kangassk left his companions to wait for him in the corridor and passed through the ancient door alone. Inside the room, magic was dancing in powerful waves, directed by Orion’s will. The immortal mage looked as pale as a marble statue.

“Any news?” he asked briefly when he saw Kangassk.

“Yes,” Kangassk nodded and handed him the recipe. “This is a poison tailored specifically to your species, Orion. It’s harmless to humans but deadly to star children.”

“I see…” said Orion with an angry hiss after quickly scanning the paper. “This is bad, very. To know our metabolism in such details, one must be a worldholder’s apprentice, no less. And to gather these ingredients, one must be really good at surviving in the haunted swamps… Hmm… I think I know how to deal with this thing. You’d better leave the room now.”

“Orion, I want to help,” Kangassk shook his head. “Let me stay here. As a donor.”

“Don’t worry. You taught me well. I won’t burn out this time. Please, Orion, let me help you.”

The invisible hook of Drain spell did hurt but not as much as it had hurt back in Iven. This time, Kangassk was ready for it and, more importantly, knew how to control the energy flow. Had he known that before, he’d still be an ambasiath today.

Being a rightful part of the magical unit was an interesting experience. It felt like hard but structured work, not like the torture he remembered. Kangassk felt magical patterns winding and unwinding around him, and saw the top-level magic happen in front of his mind eye. He could even recognize his own contribution to the succession of elaborate silent spells created by Orion: a red thread among the colourless ones…

The experience had tired him out but it was well worth it. When the session ended, Kangassk didn’t fall to the ground, no, he stood up to his full height, exhausted but not drained.

The other mages, dismissed by Orion, were leaving the room. Kangassk alone was told to stay. Soon, there were only the star children and one little mortal. 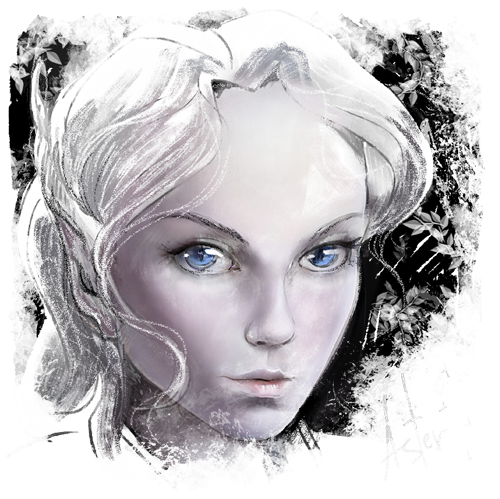 “Aster,” Orion called for her, his voice warm and gentle now when the danger was no more, “this is Kangassk Del-Emer, the worldholders’ new apprentice. He saved your life.”

“Nice to meet you, Kangassk… Thank you for everything.”

Despite all that she had been through, the daughter of stars raised herself on one elbow and extended her hand to the mortal, offering a handshake. A handshake! The desert-dweller gesture, little-known in the civilized world. She knew. And she cared!

Kangassk returned the handshake with a big, shining grin. Aster’s fingers were ice cold to the touch and trembling but her grasp was still a warrior’s grasp, firm and true.

“Orion,” she said. “We all need rest. Please, take care of the things in the Tower for me today. Mage teams need orders. My apprentices need to know that I’m alive and well. And your companions need rooms to spend the night in.”

“I’d rather stay here with you…” Orion tried to object.

“I am no longer in danger, Orion,” she said firmly. “Do as I said. And come back.” Aster smiled and squeezed his hand.

“I will,” the son of stars smiled back to her.

Random stuff: Internet is a lonely place. Please, leave me a comment. No registration needed.
Random stuff: After you've read the page, scroll down to see the comments :)
Random stuff: I wrote "Cold Obsidian" when I was 20. Translating it into English has been my dream since.
Random stuff: "Obsidian Trilogy" is the reason I decided to learn to draw. I was too poor to pay an artist but wanted my novels to have beautiful covers.
Random stuff: The biggest obstacle in translating my novels into English was poetry. The poems included in my stories couldn't be removed and I couldn't translate them. Without Alan Jackson' help, there wouldn't be the translation of OT. (English poetry is still a mystery to me).
Random stuff: There is a comment section below every chapter. Take a look :) Even when no one else comments there, I always do.
Random stuff: I update the site as soon as a new illustration is ready. If you want to binge-read the story, you can buy an ebook ($1) or join my Patreon.
Random stuff: All my books are on Goodreads. If you like them, please add them to your shelves.
Random stuff: The banners below the comment section belong to ComicAd (a network of indie creators). They can help you find more interesting things to read.
Random stuff: Obsidian Trilogy is currently my side project. My main progect is Gifts of wandering ice (a sci-fi webcomic 750+ pages long)
Random stuff: I didn't simply translate the novel into English, I rewrote and added a lot to make the story better. Can't help feeling proud.
Random stuff: A new reader? Or maybe a long-time lurker? Scroll down to the comments section and say hi! No registration needed.
Random stuff: Since Obsidian Trilogy is an illustrated story, you can both vote for it at TopWebComics and boost it at TopWebFiction (no registration needed). Either way, it's a huge help!
Random stuff: Every story begins with a spark: a small idea in the author's imagination. For "Cold Obsidian" it was a dream where a warrior woman was shopping for weapons and chose one made by an apprentice, not a master.
Random stuff: I wrote "Cold Obsidian" when I was 20 and rewrote it while I was translating it into English at the age of 36. Why rewrite it at all? Because there were too many scenes that made me exclaim: oh my! What was I thinking! It doesn't make sense at all! Scratch it!
Random stuff: The name Kangassk was inspired by Kangaxx. If you played Baldur's Gate 2, you've sure met that guy.
Random stuff: I made the first illustrations for "Cold Obsidian" by hand but later moved to Krita because drawing there was faster and easier.
Random stuff: I'm new to illustrating novels, so I'm experimenting a lot and would love to hear what you think of the different styles I'm testing.
17th Oct 2021, 8:46 PM