“Yes. Does this name mean something special to you?” he raised his scar-crossed brow.

“Max’s master had the same name,” the girl lowered her eyes, then raised them again. “But it can’t be you, right? How old are you?”

“I’m twenty-one,” said Kangassk. He saw no harm in her knowing that, so he was honest.

“Max is fifteen. No, you are too young…” Edna shook her head.

“Oh well, must’ve been my namesake then.” Kan shrugged.

“Hey, I have a question too!” That was Orion. He crossed the tiny room and dropped on the floor beside the girl. “Your Max, what’s he like?”

“I won’t talk to you,” said the girl, an open disgust in her voice, “pirate!”

Edna found his clowning around not amusing, to put it mildly. Behind his back, Ainan Smalt covered his face with his palm. Kangassk barely held himself from the same gesture. Orion was unfazed by all that. He kept talking.

“So very smart of you! Bravo. How did you guess, I wonder?” The false naivete in his voice was infuriating, to say the least.

“I’m not blind,” said Edna, her voice ice cold, her gaze full of hate. “You’re dressed like a man who robs corpses often. And wears their clothes.”

“Touchée,” Orion showed his open palms in a surrendering gesture. “But let’s forget about me for a moment. It’s my master that is interesting, after all! You know, his name is Kangassk as well. What a curious coincidence, right? And your Max… hmm, let’s see… He is tall for his age, has dark curly hair and brown eyes, wears a katana without a handguard…” He paused, thinking. “He’s a short-fused kind of guy. Can be reckless sometimes but always regrets it afterwards. Also, he thinks himself a poet. But I doubt that he would show his poems to someone like you…”

Well, that did hit a nerve.

“Of course he did!!!” she shouted, clenching her fists.

“Got you!” Orion snapped his fingers, victorious, and turned to Kangassk. “I know the guy. It’s Milian. Why would he change the name…”

“I hate you!” Edna spat out, literally. Orion caught the spit mid-flight with his open palm and showed it to the girl. His reward was seeing her gag in disgust.

“Orion, please, leave,” Kangassk asked him. The pirate obeyed. “Listen, Edna… About what I said. I swear I will help you if you help me.”

“What do you want?” she crossed her arms on her chest and looked away.

“Aster the daughter of stars is dying now. Of your poison,” Kangassk explained, very patiently. “The best mages are keeping her alive but they can’t save her unless I give them a recipe or at least a name of the poison.”

“Oh, but aren’t you an Apprentice?” Edna gave him a cruel sneer. “Just do some cool magic and save the day.”

“You don’t understand,” said Kan softly. “To heal, with medicine or magic, you must know WHAT to heal, you must have a target. Without the target, all you can do is keep the patient alive to buy yourself some time for finding it.”

“He is right.” That was Ainan. “And this is especially important when poisons are involved. Lady Aster’s case is very difficult. We are helpless unless you give us a hand.”

“Please, Edna!” Kangassk put his other knee down as well. “I beg you!”

He thought that it would be easy, the begging. After all, hadn’t he often begged his master not to beat him when he was a child? And hadn’t it even worked sometimes... But it was hard now, gut-wrenching. Kan had not the slightest idea why.

"Please," he repeated with all sincerity he had in his heart. "Lady Aster is not your enemy either."

"Stand up!" Edna's voice was shaky, with a mere shadow of her former defiance. "And find me something to write on. I'll give you the recipe. "

Kangassk didn't have his journal on him but, luckily, Ainan found a crumpled sheet of paper and a stub of a pencil in his pockets. The paper was his exam cheat sheet.

“Don’t worry, I won’t tell anyone,” whispered Kan into the mage’s ear as they stood aside, watching Edna write.

Ainan nodded with a sigh of relief.

Finally, the recipe was ready. 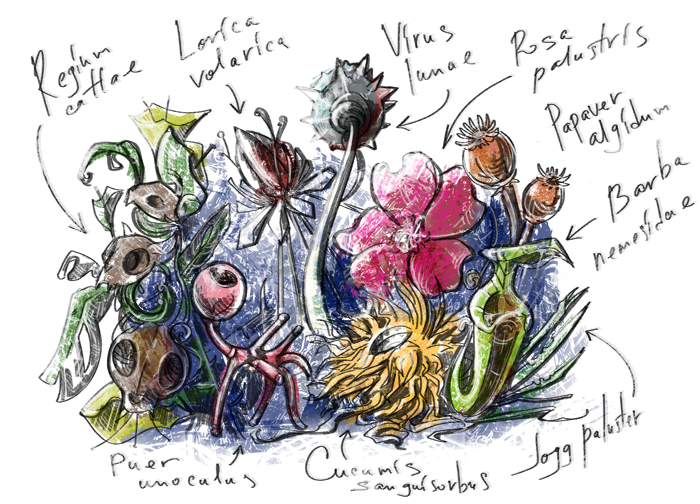 “I didn’t create the recipe, it was given to me. Same with the ingredients,” said Edna. “So you’ll have to solve the puzzle yourself, boys.”

“Ainan… give me a hand here, will you?” Kangassk turned to the young mage helplessly.

“Ah, well…” he cleared his throat. “The first one is burngrass, some swamp variety. The others I’ve never seen before. Sorry.”

“Edna, we’ll have to leave you for a while,” said Kan. “But I will return for you. I promise.”

The girl crossed her hands on her chest and gave him an uncomfortably long look. Beads of cold sweat appeared on Kangassk’s brow. For a moment, he felt like a helpless bug under a huge magnifying glass. And then... then the girl looked away, letting him go. The feeling was his alone. Neither Orion nor Ainan had noticed anything unusual.

Kangassk stood up and carefully folded the precious recipe.

“I’m sorry, but I’ll have to quench the Liht before I go,” he said to Edna. “This room is full of flammable stuff.”

“Don’t worry, I’m not afraid of the dark,” Edna smiled, her gaze following Kan, studying him, and added, meaningfully, “Apprentice.”

Random stuff: Internet is a lonely place. Please, leave me a comment. No registration needed.
Random stuff: After you've read the page, scroll down to see the comments :)
Random stuff: I wrote "Cold Obsidian" when I was 20. Translating it into English has been my dream since.
Random stuff: "Obsidian Trilogy" is the reason I decided to learn to draw. I was too poor to pay an artist but wanted my novels to have beautiful covers.
Random stuff: The biggest obstacle in translating my novels into English was poetry. The poems included in my stories couldn't be removed and I couldn't translate them. Without Alan Jackson' help, there wouldn't be the translation of OT. (English poetry is still a mystery to me).
Random stuff: There is a comment section below every chapter. Take a look :) Even when no one else comments there, I always do.
Random stuff: I update the site as soon as a new illustration is ready. If you want to binge-read the story, you can buy an ebook ($1) or join my Patreon.
Random stuff: All my books are on Goodreads. If you like them, please add them to your shelves.
Random stuff: The banners below the comment section belong to ComicAd (a network of indie creators). They can help you find more interesting things to read.
Random stuff: Obsidian Trilogy is currently my side project. My main progect is Gifts of wandering ice (a sci-fi webcomic 750+ pages long)
Random stuff: I didn't simply translate the novel into English, I rewrote and added a lot to make the story better. Can't help feeling proud.
Random stuff: A new reader? Or maybe a long-time lurker? Scroll down to the comments section and say hi! No registration needed.
Random stuff: Since Obsidian Trilogy is an illustrated story, you can both vote for it at TopWebComics and boost it at TopWebFiction (no registration needed). Either way, it's a huge help!
Random stuff: Every story begins with a spark: a small idea in the author's imagination. For "Cold Obsidian" it was a dream where a warrior woman was shopping for weapons and chose one made by an apprentice, not a master.
Random stuff: I wrote "Cold Obsidian" when I was 20 and rewrote it while I was translating it into English at the age of 36. Why rewrite it at all? Because there were too many scenes that made me exclaim: oh my! What was I thinking! It doesn't make sense at all! Scratch it!
Random stuff: The name Kangassk was inspired by Kangaxx. If you played Baldur's Gate 2, you've sure met that guy.
Random stuff: I made the first illustrations for "Cold Obsidian" by hand but later moved to Krita because drawing there was faster and easier.
Random stuff: I'm new to illustrating novels, so I'm experimenting a lot and would love to hear what you think of the different styles I'm testing.
13th Oct 2021, 7:21 PM

Drawing all those ingredients was as fun as naming them was all those years ago when I was a biology student.
User comments:
Post a Comment
Pete (Guest) 14th Oct 2021, 4:04 AM
edit delete reply
You have a way with words that is nothing short of extraordinary in a second language. Your prose is simple and unprepossessing with a curious lilting quality that somehow matches the artwork.
Mild 14th Oct 2021, 7:21 PM
edit delete reply

Thank you for your kind words!
Translating this story means a lot to me. I'm so glad to know I'm doing well!
Post a Comment
Comic Rocket ad exchange: