Together they followed their new acquaintance. This Crimson Guardian was young and slightly resembled Flavus Brian in his seriousness and naive kindness, and also, in his youth.

“What’s your name?” Kan asked him.

“Ainan Smalt,” answered the young mage. He stopped at the corridor intersection, puzzled for a moment, then confidently turned left. “I’m just a student,” he apologised. Again. “What has happened there is big. So big that all available mages have been summoned. I wish I knew what those thieves stole.”

“Can you tell me what you already know?” asked Kan.

“Sure. A group of thieves infiltrated the Tower. No one knows how. The magical wards here can keep anyone away unless it’s one of the immortals or a person with a special permit. The thieves sure weren’t… So, one of the lady Aster’s apprentices called the Crimson Guard for help, a bloodbath followed. We’re still counting the losses. Lady Aster fought unarmed against the thieves’ leader… who was smart enough not to rely on his or her skills and used poison to win. Most of the mages are looking for the thief now. I hope they’ll catch him… her… whatever.”

“And what of the thief that you’ve captured? The girl?” that was the young pirate speaking now. Something in the way he pronounced the word ‘girl’ gave Kan an unpleasant, sickening feeling as if he was on that thrice-cursed ship again, without a peppermint bar.

“She is unhurt. Didn’t even try to resist arrest,” Ainan shrugged. “Looks like she’s in shock.”

He stopped in front of a small unadorned door locked with a disproportionately heavy magical device.

“She is almost a child… about my little sister’s age,” sighed Ainan. “And now they will lock her up for life in some prison. So sad…”

The room was a closet, windowless, filled with old things, dust, and darkness. Two Lihts lit up there simultaneously, one Ainan’s, the other Kan’s, two tiny suns that ended the dark and made shadows twist and dance as they burned. It was the first time Kangassk had used magic in the South. He was used to Lihts being cool, sometimes even cold; now, the ball of magical light was uncomfortably hot in his hand.

There weren’t many places to hide in the little room but the young thief somehow did. It took both mages a while to notice her messy hair behind a stack of brooms.

The girl was small, a head shorter than Kangassk and of a very fragile build. How old was she? She seemed very young, just a teenager, but there was something strange about her, something that made Kan’s soothstone… puzzled? There was no telling what that mix of signals it radiated could even mean. There was a tinge of recognition, a shadow of foreboding, a subtle undertone of deceit, and a wandering, unstable melody under all that, like a distant, gleaming light in the dark depths of the ocean. 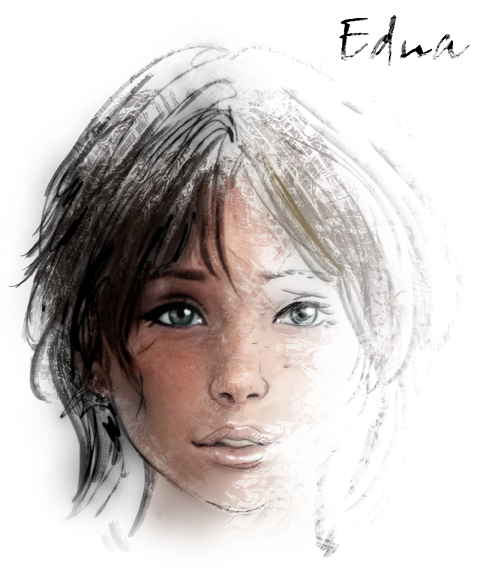 The little thief didn’t even raise her head to look at the visitors. Curled in a dusty corner under the unsteady canopy of old brooms, she kept crying. Those weak, almost meowing sounds she made, they made Kan feel like a villain; he hated that.

Kangassk cast a simple levitation spell on his magical light so it would float in the air in the centre of the little room. It felt nice to get rid of the uncomfortably hot glowing sphere at least. The niceness didn’t last, though, for as soon as he had got down on one knee before the girl, his cold obsidian ignited a hot coal of foreboding under his heart.

Kangassk didn’t take the thief seriously and reaped the consequences right away. Everything happened very fast. Wound up like a spring, the thief put all her energy, all her anger, all her hours of fear and despair into one little action that was meant to end her new acquaintance once and for all. A glass shard sparkled in her hand as it flew toward Kan’s throat. There was no way to react in time. Neither Ainan nor Orion could’ve helped him. But, thanks to his cold obsidian, he knew. Knowledge is power, they say. It is.

The girl’s slender wrist met Kangassk’s open palm and was caught in his grasp, as firm as any smith’s, like a mouse in a trap.

“I am not your enemy,” said Kangassk slowly and loudly, making sure every word got home, and opened his hand.

The little thief didn’t even move. She just stared at him, her eyes wide and full of terror. The glass shard fell to the floor with a sharp, jingling sound. Kangassk carefully wrapped it with his cloak and lifted it to the light.

“This isn’t just a shard, right? You can't kill a full-grown man with such a little thing,” he said. “Unless it’s poisoned, of course…”

The girl gasped but said nothing.

“Edna,” she said, her lips trembling.

What happened a moment later made both Ainan and Orion grasp their swords but left Kangassk quietly sitting where he was. Edna lunged at him again, with the same energy as the last time. Only now she didn’t try to kill the Apprentice. No, she hid her face in his cloak, a hand on each shoulder, and wept, loudly and miserably like the child she - probably - was.

Ainan and Orion exchanged glances and turned to Kangassk again, a silent question in their eyes. He didn’t need a soothstone to guess what the question was.

“Who?” he asked, very quietly not to scare the girl away. “Who killed your friends?”

Kan threw a quick glance at his companions. Both frantically gestured for him to keep going.

“You all were a team, right?” he asked. A sorrowful sob was the answer. Yes, they were. But what was the girl’s place in that team? Well, he had a clue now. “And you were their poison expert?”

Kangassk took the girl by the shoulders and gently pushed her away to look her in the eye. A simple soothing spell he wordlessly cast helped her calm down enough to stop crying.

“Please, help me, Edna. And I will do my best to help you,” he promised. “My name is Kangassk, I’m the worldholders’ apprentice. I can vouch for you, save you from life in prison…”

“You… Kangassk?” the girl whispered, surprised.

Random stuff: Internet is a lonely place. Please, leave me a comment. No registration needed.
Random stuff: After you've read the page, scroll down to see the comments :)
Random stuff: I wrote "Cold Obsidian" when I was 20. Translating it into English has been my dream since.
Random stuff: "Obsidian Trilogy" is the reason I decided to learn to draw. I was too poor to pay an artist but wanted my novels to have beautiful covers.
Random stuff: The biggest obstacle in translating my novels into English was poetry. The poems included in my stories couldn't be removed and I couldn't translate them. Without Alan Jackson' help, there wouldn't be the translation of OT. (English poetry is still a mystery to me).
Random stuff: There is a comment section below every chapter. Take a look :) Even when no one else comments there, I always do.
Random stuff: I update the site as soon as a new illustration is ready. If you want to binge-read the story, you can buy an ebook ($1) or join my Patreon.
Random stuff: All my books are on Goodreads. If you like them, please add them to your shelves.
Random stuff: The banners below the comment section belong to ComicAd (a network of indie creators). They can help you find more interesting things to read.
Random stuff: Obsidian Trilogy is currently my side project. My main progect is Gifts of wandering ice (a sci-fi webcomic 750+ pages long)
Random stuff: I didn't simply translate the novel into English, I rewrote and added a lot to make the story better. Can't help feeling proud.
Random stuff: A new reader? Or maybe a long-time lurker? Scroll down to the comments section and say hi! No registration needed.
Random stuff: Since Obsidian Trilogy is an illustrated story, you can both vote for it at TopWebComics and boost it at TopWebFiction (no registration needed). Either way, it's a huge help!
Random stuff: Every story begins with a spark: a small idea in the author's imagination. For "Cold Obsidian" it was a dream where a warrior woman was shopping for weapons and chose one made by an apprentice, not a master.
Random stuff: I wrote "Cold Obsidian" when I was 20 and rewrote it while I was translating it into English at the age of 36. Why rewrite it at all? Because there were too many scenes that made me exclaim: oh my! What was I thinking! It doesn't make sense at all! Scratch it!
Random stuff: The name Kangassk was inspired by Kangaxx. If you played Baldur's Gate 2, you've sure met that guy.
Random stuff: I made the first illustrations for "Cold Obsidian" by hand but later moved to Krita because drawing there was faster and easier.
Random stuff: I'm new to illustrating novels, so I'm experimenting a lot and would love to hear what you think of the different styles I'm testing.
11th Oct 2021, 8:05 AM