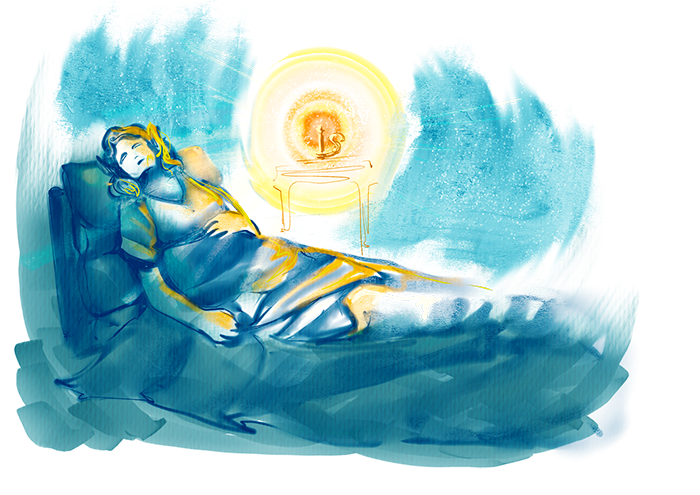 “Orion! Orion is here! Orion the son of stars!” the voices of the Crimson Guardians, male and female, young and old, echoed in the halls of Vlada’s home.

The Sun Tower had never been so noisy before. The sounds of the commotion seeped everywhere, from the deepest dungeons to the highest peaks of the gigantic structure that now resembled a disturbed anthill.

Councillor Irene turned around to face the unexpected guest; her cloak, all-crimson, no grey, flapped as she did so. Just like their colleagues from the Northern Council, the Southern councillors made sure they looked different from common mages.

Irene stepped over an overturned lamp on her way and walked toward Orion. He didn’t even glance at her.

“Where’s Aster?” was all he wanted to know.

“I ordered her to be taken to her bedroom, master Orion,” Irene replied in the most humble and soothing tone she could muster. “For now, her life is no longer in danger. The best mages are with her…”

“What happened?” The low, growling voice this question was asked with, gave chills to everyone present in the hall. When you hear a powerful mage speak like this, you’d better hope to never be his enemy.

Irene faced the immortal and kept her cool.

“She was poisoned,” said the Crimson councillor in a steady, firm tone, looking the immortal non-human right in the eyes.

“Take me to her!” ordered Orion. “And you,” he dropped his voice almost to a whisper when turned to his companions, “you come with me.”

The tower’s spiral corridor, tall and full of vibrant light, offered a great view of the city and the sparkling sea beyond it. A view like this is always a spectacle worthy of beholding… while sitting on a windowsill with a bag of biscuits on your lap and a mug of steaming coffee in your hands. But now, fear and smell of blood filled these walls. Kan and Orion the descendant of Ziga, being only humans, could not help but to respond to the chilling atmosphere by keeping their hands on their swords’ hilts.

Why was a council, either Grey or Crimson, always involved when something bad happened, Kangassk wondered as he walked.

“She’s here,” Irene nodded at the half-opened door in front of her. 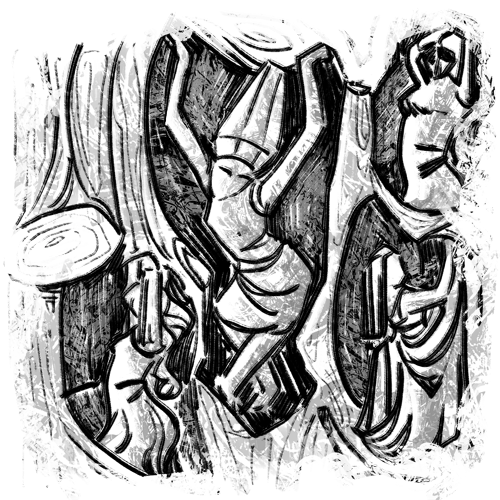 It was a beautiful door made of ancient wood, light and peculiarly textured. There were carvings on it, lots of them, a host of ethereal figures that looked as if they had been frozen mid-dance. They meant something to Orion and seeing them again was probably similar to disturbing an old wound for he stopped there for a moment, out of breath, his eyes wide and his ears alert, then made a strange sound - something between a hiss and a sigh - and pushed the door open.

Tapestries, as masterfully done as those from the Grey Tower. A bookmarked book and a stack of notepapers on a little bed table. A potted exotic succulent on the windowsill that chose this unlucky night to bloom. Every thing, big or little, in this room spoke of the lady that lived there, of Aster. But where was she? Probably right here, in her bed, only Kangassk could not see her because of all the mages standing around it. All of them had grey-crimson uniforms. Five of them hunched painfully, with one knee bent like… donors?

A battle Seven in action was the last thing Kan expected seeing there.

The five donors didn’t move but the remaining two mages of the Seven stepped aside to let Orion approach the bed. Kangassk and the young pirate followed him, just as he asked them to.

“...a woman of my age and race…” Orion had said back then, on the emerald ship when explaining Kan the story with Meralli. It was she, Aster, a child of stars, just like Orion himself.

She was slender and tall, probably much taller than Orion. Her ears had the same half-human half-cat shape. Only her fur, long and braided, was white where Orion’s was black and her eyes, half-covered by her eyelids now, were azure blue… like Sereg’s eyes were in those rare times when he was calm and in peace with himself.

What was Orion feeling now? Hard to imagine. Nonetheless, he braced himself, he made his voice ring with steel again and started giving orders. The son of stars was not giving up yet, not at all.

“Come here, young man,” he said to a lonely mage standing beyond the working Seven. “Tell me about the poison.”

“I’m sorry, master, we know little,” the mage spread his hands apologetically. “Lady Aster’s wound is a mere scratch. It seems that the poison was on the blade that left it.”

“Did you find the blade?” Orion went on.

“No, master,” the mage shook his head. “We checked the weapons of all the thieves but they were not poisoned.”

“Are any of the thieves still alive?”

“Just one. A teenaged girl.”

“Have you questioned her?”

“I see… Kangassk!” the son of stars turned to his friend. “This mage will take you to the girl. Question her. Use your soothstone if you must. Do whatever you need, just get me the info on the poison. I must stay here to keep Aster alive.”

“And I’ll see that he does. I’m going with him,” said Orion the pirate. The son of stars nodded.

Random stuff: Internet is a lonely place. Please, leave me a comment. No registration needed.
Random stuff: After you've read the page, scroll down to see the comments :)
Random stuff: I wrote "Cold Obsidian" when I was 20. Translating it into English has been my dream since.
Random stuff: "Obsidian Trilogy" is the reason I decided to learn to draw. I was too poor to pay an artist but wanted my novels to have beautiful covers.
Random stuff: The biggest obstacle in translating my novels into English was poetry. The poems included in my stories couldn't be removed and I couldn't translate them. Without Alan Jackson' help, there wouldn't be the translation of OT. (English poetry is still a mystery to me).
Random stuff: There is a comment section below every chapter. Take a look :) Even when no one else comments there, I always do.
Random stuff: I update the site as soon as a new illustration is ready. If you want to binge-read the story, you can buy an ebook ($1) or join my Patreon.
Random stuff: All my books are on Goodreads. If you like them, please add them to your shelves.
Random stuff: The banners below the comment section belong to ComicAd (a network of indie creators). They can help you find more interesting things to read.
Random stuff: Obsidian Trilogy is currently my side project. My main progect is Gifts of wandering ice (a sci-fi webcomic 750+ pages long)
Random stuff: I didn't simply translate the novel into English, I rewrote and added a lot to make the story better. Can't help feeling proud.
Random stuff: A new reader? Or maybe a long-time lurker? Scroll down to the comments section and say hi! No registration needed.
Random stuff: Since Obsidian Trilogy is an illustrated story, you can both vote for it at TopWebComics and boost it at TopWebFiction (no registration needed). Either way, it's a huge help!
Random stuff: Every story begins with a spark: a small idea in the author's imagination. For "Cold Obsidian" it was a dream where a warrior woman was shopping for weapons and chose one made by an apprentice, not a master.
Random stuff: I wrote "Cold Obsidian" when I was 20 and rewrote it while I was translating it into English at the age of 36. Why rewrite it at all? Because there were too many scenes that made me exclaim: oh my! What was I thinking! It doesn't make sense at all! Scratch it!
Random stuff: The name Kangassk was inspired by Kangaxx. If you played Baldur's Gate 2, you've sure met that guy.
Random stuff: I made the first illustrations for "Cold Obsidian" by hand but later moved to Krita because drawing there was faster and easier.
Random stuff: I'm new to illustrating novels, so I'm experimenting a lot and would love to hear what you think of the different styles I'm testing.
27th Sep 2021, 5:56 PM in Book 1. COLD OBSIDIAN

So this is the person Orion wanted to meet in Yga. A woman of his age and race. Another immortal. Another child of stars. And she is dying...
Post a Comment
Comic Rocket ad exchange: