He started small, wary of possible flukes of magical instability: with repairing the ship. Orion did minor repairs first to make sure that there would be no surprises, then fixed the broken mast and the emerald armour crippled by cannonballs. After that, there was time for healing the wounded.

A ragtag crowd of sailors, as noisy and curious as little children, followed the mage everywhere. They couldn’t stop commenting on how Uvel was as good as new now and answered every healing spell with applause. The wounded, some of whom Orion had caught up at the death’s door, were ecstatic. Some promised the son of stars all their riches, or their firstborn children, or something else just as precious to them; the others just bawled their eyes out, unable to contain their happiness.

Kangassk got healed as well. It took Orion just a touch to turn his friend’s wound into a handsome scar and remove the seasickness as well. He brushed his hand over Kan’s eyepatch while passing by, nodded in approval, and moved on to the next patient.

The last patient was Orion’s namesake, still locked up in the guest cabin. The son of stars went down there alone, leaving the crowd of his admirers and Kangassk to wait for him on the deck.

His wound and seasickness cured, Del-Emer’s spirits were high again. He cradled the baby karlaman plant in his hand, watching the second leaf slowly unfold under the rays of the setting sun and when it did, he smiled. Everything was all right, they were free to enter Transvolo now!

But his smile turned into an expression of horror very soon…

Kangassk sprinted to the guest cabin, flung the door open, and ran into Orion the son of stars (that felt almost like running into a wall). The immortal caught Kan by the shoulders and lifted him above the floor like a scared child.

He showed the sprout to Orion. So pretty and lively just moments ago, the tiny karlaman was brown and slimy now: dying.

“The thief took the second stabilizer out of the frame,” continued Kangassk. “There is nowhere to hurry to anymore,” he sighed.

Orion put his friend down on the floor and gave him a disapproving look.

“Can’t agree with you there,” he said in a peremptory tone. “Stealing something is one thing; getting away with it is another. Let’s go.”

“I’m super sorry, guys, but what the hell is going on?” That was the second Orion. He looked pale after receiving a good dose of healing magic but seemed full of strength again, his captain voice and pirate manners all back.

“Come with us if you want to know,” said his immortal namesake simply. “Will you?”

A brief moment of starry tranquillity - and Uvel dropped into quiet Mirumir’s bay with a splash followed by a collective “wow!” from the crew.

The city wasn’t sleeping, because port cities never sleep, so there was no doubt that the magical arrival impressed someone there as well. But neither the mage responsible for the performance nor his companions stayed to say goodbye. They jumped from one Transvolo to another, leaving the emerald ship behind.

With all his power and knowledge, Orion still was not a worldholder, so the 40 kilometres wide forbidden zone stopped him from reaching the Sun Tower right away. There was absolutely no way around that.

The three companions landed somewhere in Yga’s suburbs. A wide, well-trodden road led to the city that looked like a hive of twinkling lights from afar.

So run they did, as fast as they could, all three, Orion’s human namesake included. What was his interest in the affair - an affair he had not even the slightest idea about? Kangassk didn’t have time to ponder that question.

This race was the worst in Kan's whole life and he had thought himself to be a good runner! He used to run up and down the stairs of the Grey Tower every day, he was used to long-distance skiing… But now he was completely out of breath by the time they reached the fountain.

From the three runners, only the son of stars still was capable of a fight. Both mortals gasped for air. Kangassk leaned against the fountain’s arch not to fall; Orion the human dropped down on one knee. But they did it. They reached the Sprung cabin without even slowing their leader down. 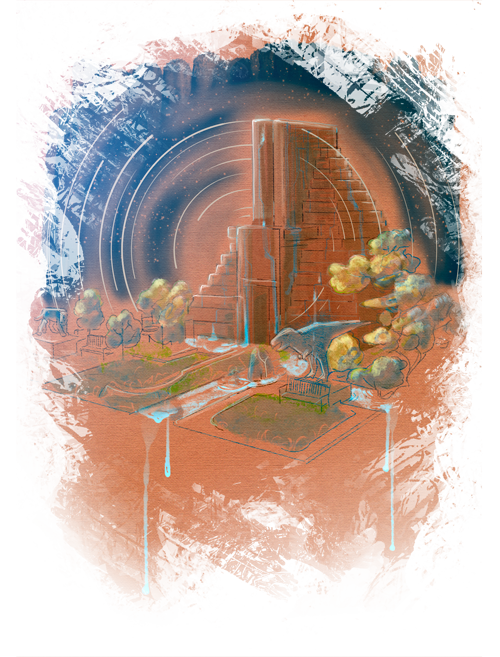 Southern Omnis is full of fountains of all shapes and sizes. No wonder: it’s often very hot there. The fountain that two Orions and Kangassk had approached, was a tall four-sided pyramid surrounded by animal statues. Water started its way on the pyramid’s top and followed an elaborate labyrinth of pathways to its bottom. Inside the pyramid, was a Sprung cabin with a crystal panel similar to those in Northern Sprung arbors.

While his mortal companions were trying to catch their breath and cool themselves down with fountain water, the star child pressed a crystal in the centre of the panel and started a cascade magical reaction that was to deliver them all to the Sun Tower’s gates.

Sprung machines are cleverly made; they won’t make you enter the same command over and over again. Once the destination is chosen, they just keep sending you from one Sprung booth to the next, which are three kilometres apart, until you reach it. The whole process takes seconds.

Kangassk, who had dipped his head into water on the pyramid station, found himself in a very different place when he lifted his head and shook the water off his hair. The fountain was different too: not a pyramid anymore but a gigantic marble eagle with its wings mantling the fountain. It stood in a noisy place - one of Yga’s central streets, possibly - and was drowning in the gorgeous fragrance of a nearby flower market.

Orion the star child gestured to his companions to follow him. They left the canopy of the marble eagle’s wings and walked into the very centre of Yga. The gates of the Sun Tower were right there, on the other side of the street.

Grey Tower, the centre of the North, was a hermit’s cold refuge but Sun Tower was Yga’s flaming heart, its amber-coloured spire scraping the clouds above the city, its doors open for everyone who wanted to learn. A circle of ancient pine trees surrounded it, southern pines, with wide crowns shaped like overturned domes and needles as long as a man’s hand and as flexible as a rapier’s blade.

There was a commotion at the gates. Hundreds of magical light spheres tore the velvet night apart. Dozens of grey-cloaked figures were running around. Seeing the familiar grey cloaks there surprised Kangassk but when one of the battle mages rushed past him, her cloak flapping in the wind, he saw the difference. These mages’ cloaks were lined with red. They were not Grey Hunters, they were Crimson Guardians, battle mages of the South.

But grey cloaks or red-lined grey cloaks, it’s never good news when a lot of them gather in one place. This was an emergency. An emergency of the highest order.

The sight was troublesome enough to make Kangassk’s heart sink but it had an even more profound effect on the immortal Orion. His face went chalk-white. Breathing heavily and peering into the darkness with his large eyes, obsidian black because of their dilated pupils, he ran to the gates, shoving everyone aside along the way. And the news of his arrival ran ahead of him.

Random stuff: Internet is a lonely place. Please, leave me a comment. No registration needed.
Random stuff: After you've read the page, scroll down to see the comments :)
Random stuff: I wrote "Cold Obsidian" when I was 20. Translating it into English has been my dream since.
Random stuff: "Obsidian Trilogy" is the reason I decided to learn to draw. I was too poor to pay an artist but wanted my novels to have beautiful covers.
Random stuff: The biggest obstacle in translating my novels into English was poetry. The poems included in my stories couldn't be removed and I couldn't translate them. Without Alan Jackson' help, there wouldn't be the translation of OT. (English poetry is still a mystery to me).
Random stuff: There is a comment section below every chapter. Take a look :) Even when no one else comments there, I always do.
Random stuff: I update the site as soon as a new illustration is ready. If you want to binge-read the story, you can buy an ebook ($1) or join my Patreon.
Random stuff: All my books are on Goodreads. If you like them, please add them to your shelves.
Random stuff: The banners below the comment section belong to ComicAd (a network of indie creators). They can help you find more interesting things to read.
Random stuff: Obsidian Trilogy is currently my side project. My main progect is Gifts of wandering ice (a sci-fi webcomic 750+ pages long)
Random stuff: I didn't simply translate the novel into English, I rewrote and added a lot to make the story better. Can't help feeling proud.
Random stuff: A new reader? Or maybe a long-time lurker? Scroll down to the comments section and say hi! No registration needed.
Random stuff: Since Obsidian Trilogy is an illustrated story, you can both vote for it at TopWebComics and boost it at TopWebFiction (no registration needed). Either way, it's a huge help!
Random stuff: Every story begins with a spark: a small idea in the author's imagination. For "Cold Obsidian" it was a dream where a warrior woman was shopping for weapons and chose one made by an apprentice, not a master.
Random stuff: I wrote "Cold Obsidian" when I was 20 and rewrote it while I was translating it into English at the age of 36. Why rewrite it at all? Because there were too many scenes that made me exclaim: oh my! What was I thinking! It doesn't make sense at all! Scratch it!
Random stuff: The name Kangassk was inspired by Kangaxx. If you played Baldur's Gate 2, you've sure met that guy.
Random stuff: I made the first illustrations for "Cold Obsidian" by hand but later moved to Krita because drawing there was faster and easier.
Random stuff: I'm new to illustrating novels, so I'm experimenting a lot and would love to hear what you think of the different styles I'm testing.
23rd Sep 2021, 8:48 PM

End of the chapter!
The end of book 1 is near (and I haven't yet decided what to draw on the cover of book 2 :( )
Post a Comment
Comic Rocket ad exchange: