Things were slowly getting together. There was proper wind in the sails now. Also, it tore through the fog and chased most of it away, opening the horizon to the view. The sky was deep blue, like a second, overturned, ocean above. After the tragedy, there was hope again, weak and shaky but steadily growing.

After his evening round with Varryn, Orion checked on Kangassk, his friend and patient. He found the young Kuldaganian standing alone on the left side of the ship, watching the sea with his hands crossed on his chest. Orion knew that pose, that look. Just like mere days ago, on top of the Grey Tower, Kangassk was listening to something only he could sense and hear. The silver ring he had replaced his handguard with was glimmering tangerine-red in the rays of the setting sun.

The son of stars approached him and shared his silent brooding for a while.

“You look a bit green. And blue,” Orion said at last. “Seasick again?”

“Yeah…” Kangassk confessed with a mirthless smile and showed Orion what was left of his mint bar: just a little stub, brown with dried blood at that.

“Did you eat it like this, blood and all?” Orion shook his head reproachfully.

“Why not? The blood was my own, so I guess it’s okay…” said Kangassk with a careless smile then added, in a very different tone, “The crew refuses to speak to me now. Even Usef…”

“It must be because of my namesake,” Orion nodded with compassionate understanding. “Well, as to me, I want to thank you for saving him. Seriously, I’m very grateful. This guy… he’s like a gift from the past… the answer to all those questions I’ve been brooding over for millennia. Thank you, friend.”

Kangassk didn’t know what to say. He looked the star child into the eye and just took it all in: the immortal’s gratitude, the echoes of the past, and the inner music of cold obsidian awakened by them.

“I still can't get it out of my head…” Kan murmured.

“The captain… her last words…I heard legends about sentient dragons but I’m from Aren-Castell, you know; no one believes in such legends there. The only dragons we’ve ever seen were those stupid yellow monsters. But today, I heard and saw their emerald cousins, just like everyone else did. And I sensed them through my cold obsidian too. They are indeed sentient. Like we are! I wish I knew what it all means.”

“Same with me,” said Orion, a sad longing in his voice. “I think that these emerald dragons are not even cousins to your yellow brutes, no more than humans are cousins to maskaks. We’re dealing with a true sentience here. If only the captain were alive… I’d ask her so many questions…”

“Do you think she was really an emerald dragon in human form?” asked Kangassk. Ignis, curious and emerald-green as always, climbed up his sleeve and perched on his shoulder.

“I wish I knew,” Orion waved his hands in a helpless gesture. “I wish we had time to investigate this matter. I wish… I wish for so many things…”

“Yeah, I’ve noticed that too: nothing ever happens when you have a lot of free time. But lots of things happen when you’re in a hurry. It’s like the world has a peculiar sense of humour… How about a long journey into the uncharted lands?” he winked at Orion. “After we’ve done with the Hora’s thief, of course.”

“Let’s concentrate on the matter at hand, Kan,” said the son of stars in a soothing tone, quenching his friend’s boyish enthusiasm as gently as he could. “I’m not a soothsayer but I can’t help but to worry too. The sooner we get to the Sun Tower the better.”

“How long until the stable zone?”

“We’re almost there. But the borders are blurry, especially now, when we no longer know the location of Hora Lunaris. Here, take this. Let’s put some of the things I taught you to practice.”

Orion took out a folded handkerchief from his pocket, unwrapped it, and placed it on Kan’s palm. The cloth was damp, and for a reason: there was a seed in it, as beautiful as a pearl on a velvet cushion, ready to sprout. And sprout it did as soon as a certain condition, unseen by a naked eye, had been met. The seed’s glossy tegument burst, letting a little white root out.

“So, tell me, my dear student,” said Orion with a mock-mentor’s strictness, “what kind of plant serves as an indicator for the Southern magical border?”

“The striped karlaman,” grumbled Kangassk who was not amused, “Karlamanus lineatus. C’mon, Orion, I’m not a child…”

“So, our kl-indicator,” Orion kept his mockingly-strict tone, “shows that we’re entering the stable magical zone. But no, we’re not jumping into Transvolo yet. We’re waiting for both leaves to unfold. Safety first!”

“I know…” Kan sighed and looked at the tiny karlaman sprout again. It was not going to hurry, not one bit. 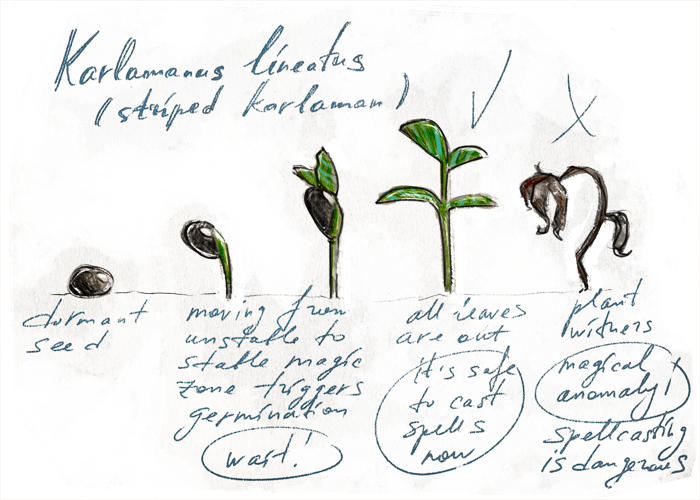 He raised his eyes to the sky. The first stars were appearing upon its indigo blue; the moon was already there, a bright crescent, as thin as an eyelash. The ship’s deck rocked under Kan’s feet, making his seasickness worse with every passing moment. He hated being there, he hated everything about the sea now, but he would gladly return to any of the days he had spent there: to the first one when he didn’t have even the mint bar to ease his suffering, to the exhausting day two, or to the battle - even that seemed better than meeting the unknown danger in Vlada’s Sun Tower. Kangassk dreaded it more than anything. He had no idea what it was but he was a hundred per cent sure that it was way out of his league. Even Orion’s presence didn’t seem very reassuring anymore.

The baby plant had already raised its tiny crown above the seed and was busy with unfolding its first striped leaf. The process was well worth beholding. It reminded Kan of his mother’s elaborate paper figures. Deya Del-Emer could take a grey piece of paper and turn it into a delicate toy: a fish, a bird, a cat, a flying ship… She never told her son about where she had learned that art and no one else in Aren-Castell knew it. Actually, Kangassk saw similar paper figures only once after his mother’s death: on that day in the Grey Tower’s lab when he had crashed those bookcases on himself and dozens of little mementoes had fallen out of the ancient books. How could the worldholders’ little art secret find a way to a young Kuldaganian woman? He wished he knew…

The sudden flush of warm memories turned out to be just exactly what Kangassk needed now. He drew a deep breath and exhaled slowly, feeling his anxiety subside and his fears of the unknown fade away.

“Keep watching it,” said Orion. “I’ll leave you for a while. I have promises to keep.”

Random stuff: Internet is a lonely place. Please, leave me a comment. No registration needed.
Random stuff: After you've read the page, scroll down to see the comments :)
Random stuff: I wrote "Cold Obsidian" when I was 20. Translating it into English has been my dream since.
Random stuff: "Obsidian Trilogy" is the reason I decided to learn to draw. I was too poor to pay an artist but wanted my novels to have beautiful covers.
Random stuff: The biggest obstacle in translating my novels into English was poetry. The poems included in my stories couldn't be removed and I couldn't translate them. Without Alan Jackson' help, there wouldn't be the translation of OT. (English poetry is still a mystery to me).
Random stuff: There is a comment section below every chapter. Take a look :) Even when no one else comments there, I always do.
Random stuff: I update the site as soon as a new illustration is ready. If you want to binge-read the story, you can buy an ebook ($1) or join my Patreon.
Random stuff: All my books are on Goodreads. If you like them, please add them to your shelves.
Random stuff: The banners below the comment section belong to ComicAd (a network of indie creators). They can help you find more interesting things to read.
Random stuff: Obsidian Trilogy is currently my side project. My main progect is Gifts of wandering ice (a sci-fi webcomic 750+ pages long)
Random stuff: I didn't simply translate the novel into English, I rewrote and added a lot to make the story better. Can't help feeling proud.
Random stuff: A new reader? Or maybe a long-time lurker? Scroll down to the comments section and say hi! No registration needed.
Random stuff: Since Obsidian Trilogy is an illustrated story, you can both vote for it at TopWebComics and boost it at TopWebFiction (no registration needed). Either way, it's a huge help!
Random stuff: Every story begins with a spark: a small idea in the author's imagination. For "Cold Obsidian" it was a dream where a warrior woman was shopping for weapons and chose one made by an apprentice, not a master.
Random stuff: I wrote "Cold Obsidian" when I was 20 and rewrote it while I was translating it into English at the age of 36. Why rewrite it at all? Because there were too many scenes that made me exclaim: oh my! What was I thinking! It doesn't make sense at all! Scratch it!
Random stuff: The name Kangassk was inspired by Kangaxx. If you played Baldur's Gate 2, you've sure met that guy.
Random stuff: I made the first illustrations for "Cold Obsidian" by hand but later moved to Krita because drawing there was faster and easier.
Random stuff: I'm new to illustrating novels, so I'm experimenting a lot and would love to hear what you think of the different styles I'm testing.
17th Sep 2021, 7:01 PM

In Omnis, magic is a sister of poetry, yes. But it's also science.
Post a Comment
Comic Rocket ad exchange: