Orion the son of stars joined Varryn the ship’s doctor in treating the wounded. Ursin took the helm. Kangassk tried to help where he could.

Uvel’s crew lost six people; six were wounded, three of them gravely. But there was still hope for everyone, even for the young pirate that Kan had wounded in the stomach. One day, just one day - and Uvel would enter the stable magic territory. Orion promised to heal everyone then. For now, he was doing everything he could so the wounded would survive.

According to Varryn, the son of stars made miracles with the simplest meds from the ship’s medkit. He stopped bleeding, sewed up wounds, made multicomponent potions right on the deck to deal with his patients’ pain and shock. He even treated those who were lightly wounded so their wounds wouldn’t get infected. Their treatment was mostly burngrass bandages, of course, but it worked.

Kangassk got some attention as well. Orion put several sutures on his brow, just enough to close the wound and ensure that it would turn into the type of scar that makes a man look more handsome instead of ugly.

“What a miserable Lifekeeper I am,” Kan said when Orion was disinfecting his wound with a burngrass potion. “Ouch!” The burngrass was true to its name as always; it hurt mercilessly.

“Can’t agree with you there, kid,” Orion shook his head. “You’ve saved two lives today, as far as I know.”

“Have I? One I wounded in the stomach and the other… I think I gave him a concussion and broke his jaw…” Kangassk was sceptical.

“Not bad, I’d say.” Orion’s confidence didn’t waver even a bit. “It often takes days for a person with an abdominal wound to die, so there’s a good chance that he will make it to the stable zone. Meanwhile, he can take his time to rethink some of his life choices. He might even become a decent man yet.”

“How so?” Kan sniffed, still unconvinced.

“He’s young, even younger than you are; piracy might’ve looked like an adventure to him before but I doubt it does now. You, a non-pirate, must have made quite an impression on him… Well, I did what I could for you without magic, kid. Your eye should be safe.”

“Impression? I? Pfft!” Kangassk rolled his eyes. “Oh no, impressing mortals is your thing, you’re the living legend here. And the best doctor, too. So if anyone has saved the guy, it was you, not I.”

“Nah!” Orion lifted his finger in Vlada’s own exclamation gesture. “Had you killed him, there would be no one to heal. Or to impress. So the glory is all yours. And don’t argue! After all, no one has ever promised you that a Lifekeepers’ way would be easy.”

Mentioning the Lifekeepers made Kangassk remember one thing he was going to ask of his immortal friend.

“Orion, please, take a look at the second pirate, the one with the broken jaw… and the concussion. I took care of a wound on his shoulder but I have no idea what to do about his other injuries.”

“I locked him up in our cabin.”

“Oh?” Orion lifted his brow, surprised. “Do you really think he may try to run away in such condition?”

“No.” Kangassk shook his head. “I did it too keep the crew away from him. They wanted the guy’s head. I told them that he was yours to hold them back. It worked. Still, better safe than sorry: that’s is why I locked him up.”

They stopped by their cabin’s door.

“He is the one who killed the captain, right?” asked Orion.

“Yeah,” Kangassk nodded. “And the one who nearly killed me. He had a Lifekeeper’s sword on him. Also, Usef said that he was in charge of the boarding party. This is all I know.”

“All right…” Orion bit his lower lip with one fang. “Speaking of Usef… looks like his life is the third one you’ve saved today. Just saying… And now open the door; let’s pay our little villain a visit.”

Some dreams are so vivid that dying in them feels like a very real thing. This dream was of that kind. Must have been. The human named Orion clung to that hope until the very last moment when denying reality was no longer possible. Then it all sank in: he indeed had chased the emerald ship on his Black Dogfish; he had boarded it; he had lost the battle. And his crew… they had abandoned him in the end.

But then what? He remembered a young brown-skinned man with a Lifekeeper’s sword, a katana without a handguard. Everything else was a blur.

Orion realized that someone had carried him to a bed, bandaged his wounds, and fixed his broken jaw. His pain was muted and his thoughts foggy; that meant that someone cared for him enough to give him painkillers. That made him hopeful.

He was prepared to face Sumah when someone approached his bed but no, it was that brown-skinned lad again. Only now his left eye was bandaged. The stranger smelled of gunpowder, blood, and meds. This hinted that the battle had ended just a few hours ago.

“Your eye… did I…” Speaking was torture. Every word made young Orion’s jaw throb with pain that even the painkiller fog could not completely mute.

The wounded pirate gave him a crooked half-smile.

“I forgot how it feels… to be a Lifekeeper…” Orion spoke slowly, carefully articulating every word. It hurt, it filled his mouth with metallic taste of his own blood but to him, it was worth the effort. “Thanks for reminding me. I didn’t expect… What’s your name?”

The wounded pirate’s reaction to his name startled and puzzled Kan. The guy’s eyes, foggy and dull because of bloodloss and painkillers a moment ago, now burned with inner fire Del-Emer could not understand. Also, the pirate was speaking, speaking non-stop and clenching his saviour’s shoulder with his wounded hand, completely merciless to his injuries now. Fresh blood appeared on his bandages but he didn’t care.

Names and places, confessions and questions, everything mixed up in the pirate’s fervent speech, slurred because of his unceasing attempts to say as much as he could as fast as he could with his disfigured mouth.

“Jarmin… how’s Jarmin?” was the last recurring phrase Kangassk had managed to decipher by the time he heard someone knock at the door. The knock was familiar: exactly the one that he and the star child had agreed upon an hour ago. It was Orion, no doubt.

Kangassk rushed to the door, happy to have a break from the pirate’s unexplainable madness.

“So, how’s our patient?” was the first thing Orion asked after stepping into the room.

“Splendid! I wanted to ask him a couple of questions.”

The son of stars approached the patient and waved his hand before the pirate’s eyes, dull and foggy again, to get his attention.

“Orion,” was the answer.

“Ah, a namesake…” The star child scratched his chin thoughtfully. “This is my name as well.”

“Of course…” the pirate whispered. “I was named in your honour.”

Orion the son of stars smiled at this. Kangassk knew that sad, nostalgic smile very well. 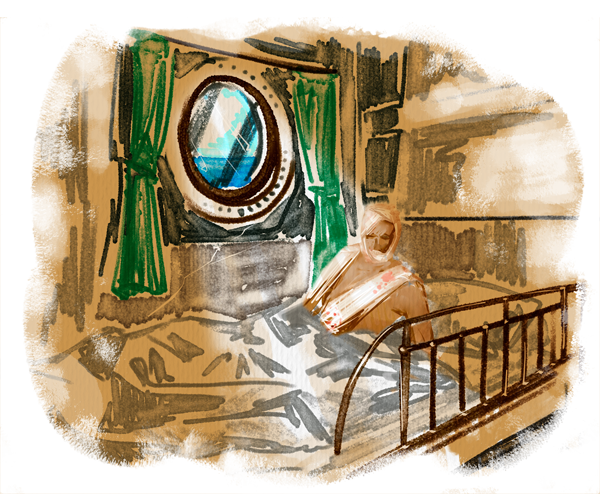 “You’re a descendant of Ziga and Meralli, aren’t you?” asked the immortal.

“How do you know?” his namesake growled painfully.

“I have a good memory, kid. No matter how many years have passed, I will always recognize Ziga’s square jaw and Meralli’s sapphire eyes.

“Do you know what happened to your ancestors after they left the charted Omnis?”

They had already closed the door when Orion’s sensitive ears heard a faint whisper behind it,

Random stuff: Internet is a lonely place. Please, leave me a comment. No registration needed.
Random stuff: After you've read the page, scroll down to see the comments :)
Random stuff: I wrote "Cold Obsidian" when I was 20. Translating it into English has been my dream since.
Random stuff: "Obsidian Trilogy" is the reason I decided to learn to draw. I was too poor to pay an artist but wanted my novels to have beautiful covers.
Random stuff: The biggest obstacle in translating my novels into English was poetry. The poems included in my stories couldn't be removed and I couldn't translate them. Without Alan Jackson' help, there wouldn't be the translation of OT. (English poetry is still a mystery to me).
Random stuff: There is a comment section below every chapter. Take a look :) Even when no one else comments there, I always do.
Random stuff: I update the site as soon as a new illustration is ready. If you want to binge-read the story, you can buy an ebook ($1) or join my Patreon.
Random stuff: All my books are on Goodreads. If you like them, please add them to your shelves.
Random stuff: The banners below the comment section belong to ComicAd (a network of indie creators). They can help you find more interesting things to read.
Random stuff: Obsidian Trilogy is currently my side project. My main progect is Gifts of wandering ice (a sci-fi webcomic 750+ pages long)
Random stuff: I didn't simply translate the novel into English, I rewrote and added a lot to make the story better. Can't help feeling proud.
Random stuff: A new reader? Or maybe a long-time lurker? Scroll down to the comments section and say hi! No registration needed.
Random stuff: Since Obsidian Trilogy is an illustrated story, you can both vote for it at TopWebComics and boost it at TopWebFiction (no registration needed). Either way, it's a huge help!
Random stuff: Every story begins with a spark: a small idea in the author's imagination. For "Cold Obsidian" it was a dream where a warrior woman was shopping for weapons and chose one made by an apprentice, not a master.
Random stuff: I wrote "Cold Obsidian" when I was 20 and rewrote it while I was translating it into English at the age of 36. Why rewrite it at all? Because there were too many scenes that made me exclaim: oh my! What was I thinking! It doesn't make sense at all! Scratch it!
Random stuff: The name Kangassk was inspired by Kangaxx. If you played Baldur's Gate 2, you've sure met that guy.
Random stuff: I made the first illustrations for "Cold Obsidian" by hand but later moved to Krita because drawing there was faster and easier.
Random stuff: I'm new to illustrating novels, so I'm experimenting a lot and would love to hear what you think of the different styles I'm testing.
13th Sep 2021, 4:23 PM