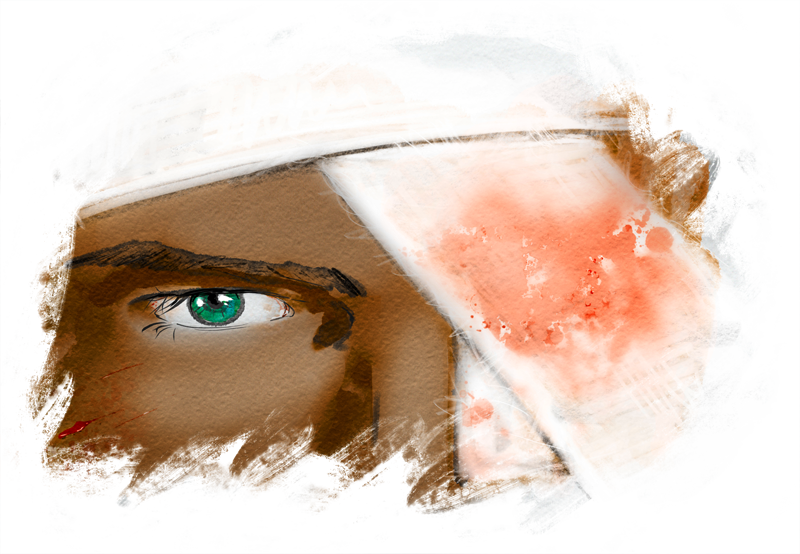 With Kan’s adrenalin level back to normal again, pain, exhaustion, and seasickness made their return all at once. Slowly, to avoid blacking out or throwing up, Kangassk sat down on the deck, next to the knocked-out pirate. He touched his bleeding brow to wipe the blood out and regretted it instantly as the wound answered the touch with searing pain. That was when Orion saw him. The son of stars covered the distance between them in a couple of long jumps and went down on one knee before Kangassk.

“How bad is it, kid?” he asked, genuinely worried.

Orion carefully lifted his friend’s head by the chin and took a good look at the wound. Still unsure, he carefully touched Kan’s swollen eyelid with his little finger (having had spat on that little finger beforehand, for disinfection’s sake, of course).

“The eye is okay,” Orion concluded with a smile. “But we can’t afford to be careless here. Press your peppermint bar to the wound for now. Menthol is a very weak antiseptic but it’s still better than nothing. I’ll find you some burngrass later.”

“Orion…” Kan’s voice fell, turning to a whisper as he pointed at the crowd gathering at the right hull. Even the gravely wounded were crawling there. “Let’s see what’s going on.”

Captain Ptarmika Sarsazan was dying. Kneeled before her, Ursin, her grandson, a bald, bearded giant of a man, was crying openly like a little child.

“Step aside! Doctor’s coming through!” shouted Orion as he was elbowing his way through the crowd.

Finally, he went down to one knee before the captain just like he had done for Kangassk earlier. Ptarmika’s face was chalk-white from bloodloss. The wound on her thigh looked bad.

With a crunch, Orion tore a sleeve out of Ursin’s shirt and used it to put a tourniquet above the wound to stop the bleeding. Not that it could help much now.

“Don’t speak. Save your strength,” Orion ordered her but she wouldn’t listen.

“You are a great warrior…” she said. “It was an honour to fight alongside you… My childhood dream came true… Ursin… Where’s my grandson?”

With a bitter, miserable groan, the crying man moved closer to his grandmother.

“Ah, my little boy… I have something to tell you before I go…” The captain’s voice was fading away with every passing moment. “Do you remember the stories I told you when you were little? The dragon stories?” A weak, trembling smile touched her bloodless lips.

“They’re all true, these stories,” she kept talking. “Emerald dragons. They’re real. Sentient. Curious. They can live for thousands of years but if their destiny catches up with them when they wear their human disguise, they die just like humans do.”

Those were the captain’s last words. Her final message delivered, Ptarmika stopped grasping at life and quietly passed away in her grandson’s arms. Just as the last breath left her body, the crew of the emerald ship heard a piercing cry from the sky. Dragon cry. Kangassk would never mistake one for anything else. This was the exact sound a yellow Kuldaganian dragon would make… if it were sentient and could grieve. The cold obsidian was of the same opinion: this cry belonged to an intelligent, compassionate creature that had come to say their last goodbye. Another cry followed soon. And then several more, every one of them tearing at Kan’s very soul.

Then, finally, THEY showed themselves: a group of emerald dragons, even more beautiful than their drawings on Uvel’s sails now blackened with soot. They danced and sang among the pink clouds, filling the morning skies above Chermasan Sea with otherworldly music. It was a miracle. The saddest miracle of them all.

The moment the dragons disappeared, reality hit everyone back with all its cruel strength, making people remember about their wounds again. A chorus of cries flooded the silence, the cries of a very different kind: “Doctor!” and “Help!”

Random stuff: Internet is a lonely place. Please, leave me a comment. No registration needed.
Random stuff: After you've read the page, scroll down to see the comments :)
Random stuff: I wrote "Cold Obsidian" when I was 20. Translating it into English has been my dream since.
Random stuff: "Obsidian Trilogy" is the reason I decided to learn to draw. I was too poor to pay an artist but wanted my novels to have beautiful covers.
Random stuff: The biggest obstacle in translating my novels into English was poetry. The poems included in my stories couldn't be removed and I couldn't translate them. Without Alan Jackson' help, there wouldn't be the translation of OT. (English poetry is still a mystery to me).
Random stuff: There is a comment section below every chapter. Take a look :) Even when no one else comments there, I always do.
Random stuff: I update the site as soon as a new illustration is ready. If you want to binge-read the story, you can buy an ebook ($1) or join my Patreon.
Random stuff: All my books are on Goodreads. If you like them, please add them to your shelves.
Random stuff: The banners below the comment section belong to ComicAd (a network of indie creators). They can help you find more interesting things to read.
Random stuff: Obsidian Trilogy is currently my side project. My main progect is Gifts of wandering ice (a sci-fi webcomic 750+ pages long)
Random stuff: I didn't simply translate the novel into English, I rewrote and added a lot to make the story better. Can't help feeling proud.
Random stuff: A new reader? Or maybe a long-time lurker? Scroll down to the comments section and say hi! No registration needed.
Random stuff: Since Obsidian Trilogy is an illustrated story, you can both vote for it at TopWebComics and boost it at TopWebFiction (no registration needed). Either way, it's a huge help!
Random stuff: Every story begins with a spark: a small idea in the author's imagination. For "Cold Obsidian" it was a dream where a warrior woman was shopping for weapons and chose one made by an apprentice, not a master.
Random stuff: I wrote "Cold Obsidian" when I was 20 and rewrote it while I was translating it into English at the age of 36. Why rewrite it at all? Because there were too many scenes that made me exclaim: oh my! What was I thinking! It doesn't make sense at all! Scratch it!
Random stuff: The name Kangassk was inspired by Kangaxx. If you played Baldur's Gate 2, you've sure met that guy.
Random stuff: I made the first illustrations for "Cold Obsidian" by hand but later moved to Krita because drawing there was faster and easier.
Random stuff: I'm new to illustrating novels, so I'm experimenting a lot and would love to hear what you think of the different styles I'm testing.
8th Sep 2021, 4:26 PM in Book 1. COLD OBSIDIAN

The aftermath of the battle is not always a joyful celebration and a feast. More often, it's picking up pieces: tending to the wounded, burying the dead, repairing the ship, and bracing for the long journey ahead.
Post a Comment
Comic Rocket ad exchange: