A year and a half - this is how long it had been since Kangassk’s first battle in Kuldagan where he had survived only by pure chance. The battle with Crogan’s hyenas was no better. Now, he had to face people and not just people but experienced, merciless cutthroats. He had been dreading this moment since the beginning of his sea journey but now, when the battle was happening around him, Kan realized how much he had grown as a fighter.

His training with the immortals was finally paying off, his body “thinking” way quicker than his terrified mind did. The battle had just begun and he had already slain two people and seriously wounded the third. Not something an aspiring Lifekeeper would be proud of, of course.

Kangassk lost track of time in this mess of smoke, fog, and blood. He glimpsed Orion cutting down people like grass and the captain fighting as ferociously as her hero did. Ptarmika was wounded, badly. Ursin, her grandson, tried to reach her but couldn’t get through the roaring crowd separating them. She fought alone, getting weaker with every passing second but making each swing count.

There was a brief moment when Kangassk’s vision cleared, muting the sounds of the battle and throbbing of his own heart. All great warriors he knew - Osaro, Vlada, Sereg, Orion - spoke of something similar: a moment when one’s mind takes control and rises above the reflexes. A moment when a warrior becomes himself once again.

That was when Kangassk’s next opponent stepped out of the fog before him. The young man was wounded, his left arm limp and lifeless, his clothes soaked with blood, both his own and his enemies’. But that was how everyone on Uvel looked that night. What made this particular pirate special was his sword: a katana without a handguard, just like Kangassk’s.

The pirate noticed the soothsayer’s sword as well. He even hesitated for a moment, perplexed by the coincidence, but snapped out of it quickly, shouted a battlecry and charged.

Kan was quick: he ducked, letting the bloody blade swish past his head. He tried to do the same trick again, hoping to get himself and his too-long sword some space for action, and regretted that: the pirate got him this time. Just the very tip of the enemy’s blade touched Kangassk’s skin, easily cutting through his eyebrow and cheekbone, missing his eye just the tiniest bit. But the wound, small as it was, turned out to be a game-changer. With his blood pouring into his eyes, Kangassk could barely see anything now. The pirate’s third attack should have been the end of him. But who is more dangerous than a person who has nothing left to lose? The sudden thought was liberating, inspiring even.

Kangassk raised his own sword into the defence position above his shoulder, making the enemy’s blade slide away and clear a path for one very important step. With the path open, his right hand slid past the handguard, to the blunt side of his blade. He was holding the sword like a staff now, hilt-first. He couldn’t close his fingers on the blade, of course, but even this weakened half-grasp was a big help.

So it was now or never.

The energy of the step, the powerful movement of both hands, and the weight of Kan’s moving body - all went into one precise hit: with an audible crunch, the hilt of Kangassk’s sword met the pirate’s head. 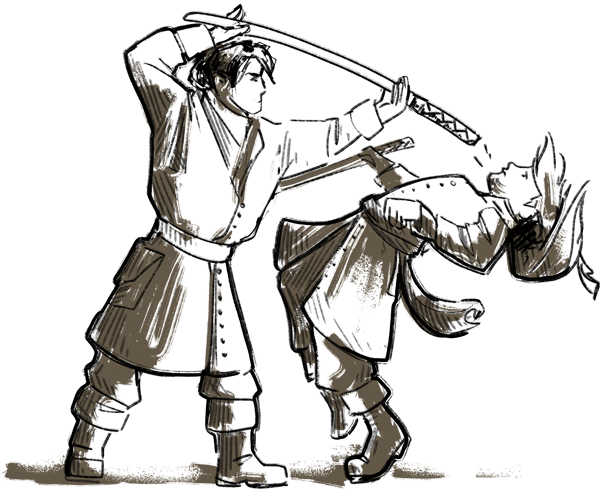 That was all. The worldholder’s apprentice, now truly a warrior and a Lifekeeper, stood over his unconscious - but breathing! - opponent.

With their leader struck down and their worst nightmare - the son of stars slaughtering humans - come to life before their eyes, the pirates panicked and fled. Someone fired a cannon at their ship as the last goodbye. There was a sharp sound of rubber chambers bursting, the little dimaran sank lower in the water and dangerously careened to one side but stayed afloat. Soon, it disappeared in the foggy labyrinth of stony teeth.

Uvel, with her emerald armour blackened by smoke and torn by cannonballs, with her deck red and slimy with blood, was greeting the weak, rosy dawn above the Perilous Archipelago…

Random stuff: Internet is a lonely place. Please, leave me a comment. No registration needed.
Random stuff: After you've read the page, scroll down to see the comments :)
Random stuff: I wrote "Cold Obsidian" when I was 20. Translating it into English has been my dream since.
Random stuff: "Obsidian Trilogy" is the reason I decided to learn to draw. I was too poor to pay an artist but wanted my novels to have beautiful covers.
Random stuff: The biggest obstacle in translating my novels into English was poetry. The poems included in my stories couldn't be removed and I couldn't translate them. Without Alan Jackson' help, there wouldn't be the translation of OT. (English poetry is still a mystery to me).
Random stuff: There is a comment section below every chapter. Take a look :) Even when no one else comments there, I always do.
Random stuff: I update the site as soon as a new illustration is ready. If you want to binge-read the story, you can buy an ebook ($1) or join my Patreon.
Random stuff: All my books are on Goodreads. If you like them, please add them to your shelves.
Random stuff: The banners below the comment section belong to ComicAd (a network of indie creators). They can help you find more interesting things to read.
Random stuff: Obsidian Trilogy is currently my side project. My main progect is Gifts of wandering ice (a sci-fi webcomic 750+ pages long)
Random stuff: I didn't simply translate the novel into English, I rewrote and added a lot to make the story better. Can't help feeling proud.
Random stuff: A new reader? Or maybe a long-time lurker? Scroll down to the comments section and say hi! No registration needed.
Random stuff: Since Obsidian Trilogy is an illustrated story, you can both vote for it at TopWebComics and boost it at TopWebFiction (no registration needed). Either way, it's a huge help!
Random stuff: Every story begins with a spark: a small idea in the author's imagination. For "Cold Obsidian" it was a dream where a warrior woman was shopping for weapons and chose one made by an apprentice, not a master.
Random stuff: I wrote "Cold Obsidian" when I was 20 and rewrote it while I was translating it into English at the age of 36. Why rewrite it at all? Because there were too many scenes that made me exclaim: oh my! What was I thinking! It doesn't make sense at all! Scratch it!
Random stuff: The name Kangassk was inspired by Kangaxx. If you played Baldur's Gate 2, you've sure met that guy.
Random stuff: I made the first illustrations for "Cold Obsidian" by hand but later moved to Krita because drawing there was faster and easier.
Random stuff: I'm new to illustrating novels, so I'm experimenting a lot and would love to hear what you think of the different styles I'm testing.
2nd Sep 2021, 4:47 PM

Google "pommel strike" if you want to know more about the thing Kangassk did. Alas, I couldn't find any references with the same move done with a katana, so I had to improvise to illustrate this page. I even had to pick up my bokken (wooden katana for training) again.
I wrote CO when I was 20. I'm 36 now and my kendo skills are very rusty, so the illustration might be not 100% accurate. Sorry.
User comments:
Post a Comment
Brian Harvey (Guest) 4th Sep 2021, 5:57 AM
edit delete reply
Wow, I'm caught up! This is a fun story.
Mild 5th Sep 2021, 12:07 PM
edit delete reply