“...battle trimaran,” reported Orion. “Two engines. It’s just creeping up on us now but if it comes to a chase, Uvel will stand no chance. Same with the battle. A ship that big can have up to three hundred people in her crew.”

“What do you offer?” asked Ptarmika grimly.

“Going into the Perilous Archipelago,” was Orion’s answer. His voice, usually soft and quiet, had a ringing of steel in it now.

“Don’t be a fool, Orion!” Ptarmika spat out. “It’s night above and fog below! Navigating the Perry is no fun even in broad daylight. We’ll crash...”

Orion made a step forward and put his hand on the helm.

“I remember the Archipelago too well,” he said, his voice as dark and low as it was three thousand years ago. “Many times it helped me save my ships and sink the enemies’. I could lead Uvel between the rock teeth with my eyes closed. Give me the helm, captain, and I’ll leave your Sumah’s ship stranded on the rocks or crushed to bits.”

Ptarmika’s eyes filled with childish awe. Not a burnt-out immortal but a living legend - her hero - was standing in front of her now. The pirate who hunted in the night; the pirate who saw light where no human could see anything. The pirate who could fight as well as a worldholder but avoided fighting when he could outsmart the enemy instead.

...the Bloody Dawn. After a night hunt, when the sun rose above the ship he had boarded in the darkness, there were only dead bodies on the blood-crimson deck and maybe a survivor or two left to tell the tale.

Singing songs of the immortal pirate hunting in the night was still considered bad luck even three thousand years after when even great Ziga’s fame had faded into merry verses. Sumah couldn’t steal Orion’s dark glory no matter how hard he tried. He wouldn’t know what hit him…

Under Orion’s command, the emerald ship took a sharp turn and headed to the rocky labyrinth of the Perilous Archipelago.

Captain Ptarmika stood by his side, her face an impenetrable stone mask, her soul a candle brightly burning in the dark with a halo only a soothsayer could see.

Sumah stood on the front of the black ship’s central hull and looked intently into the darkness. To most of his crew, his ability to see things other people could not was a mystery, an awe-inspiring gift.

Everyone moved quietly aboard the Black Manta; even the guy who had tripped over a crooked board or something and fell kept his mouth shut. The lights were out, too: Sumah’s orders. The pirate captain was patiently waiting for something, his eyes peering into the darkness where his prey lurked.

Sumah’s face was chalk-white and his eyes red. Red and so sensitive to sunlight that he had to wear sunglasses to protect them. Sunglasses with lenses made of cold obsidian, the rumours said, worth ten years of felling trees in bitter cold in the North or about the same time in the mines of Lumenik in the South.

Sly and cruel as Sumah was, he still remained a human. He turned his inborn condition - albinism - into an advantage, no more, no less. The sun was cruel to him, leaving burns on his skin and hurting his eyes, so he learned to be nocturnal. Life was cruel to him so he learned to fight back. Legends… legends he liked and learned from them a lot, especially from those that spoke of the son of stars in his pirate years.

So far, Sumah’s ability to ambush ships in the dark had been unmatched. So far…

Sumah heard soft steps approaching and turned his head to the sound.

“When will you buy yourself a proper cutlass already? This sword of yours is ridiculous,” he said to the man that stood before him.

“Later, captain,” the man answered in a soft tone, “as soon as I find a worthy replacement.”

“You’ve been saying this for years,” he said and gave the man a friendly nudge to the shoulder.

“Oh, am I a poor fighter, captain?” the ridiculous-sword wielder whispered and made a funny face acting naive and scared.

“Of course not… But can’t you at least put a handguard on this thing? Ah, nevermind...” Sumah shook his head. “So what did you want to say?”

“Everything is ready, captain. That’s all.”

“Good. Wait for my signal. I want to come closer.”

Sumah the Pale, as he was called in port cities big and small, turned his eyes to Uvel again. A moment later, the emerald ship dropped her sails, turned her engines on, and headed toward the rocky labyrinth.

“Just you look at them!” Sumah exclaimed, adding a bunch of unprintable words to that. “They noticed us! Start the engines, lads!”

The captain himself stood at the helm of Black Manta now. Both engines roared, warming up, the sails were dropping one by one. The chase was about to begin. Uvel could be fast, Uvel could be lucky but Sumah had a plan for everything…

The roar of the black ship’s engines starting made the day-long silence on Uvel’s deck explode with sounds of panic. Cries, curses, heavy boots hitting the boards, things falling, metal clinking - the cacophony was deafening.

Kangassk, lost at first, became a part of the battle machine too: Usef jumped somewhere out of the darkness, pushed him toward a pile of cannonballs and told him to carry them to the starboard cannon. The short journey nearly ended with Kan falling overboard because of how sharply the ship turned every time Orion made it avoid another rock.

Orion… Orion was right about everything: about the seasickness that vanished as soon as Kan’s adrenaline went up; about the long katana being a nuisance on the crowded deck too.

The roar of Black Manta’s engines grew louder and louder with every passing moment. When a gigantic silhouette of the pirate ship came into view, veiled by the fog, Uvel’s team fell silent again, horror-struck. Several shouts and punches later, captain Ptarmika got her crew back to work. Soon, the first cannonball - the one Kangassk had brought - flew toward the enemy. Black Manta answered by sending six cannonballs back. 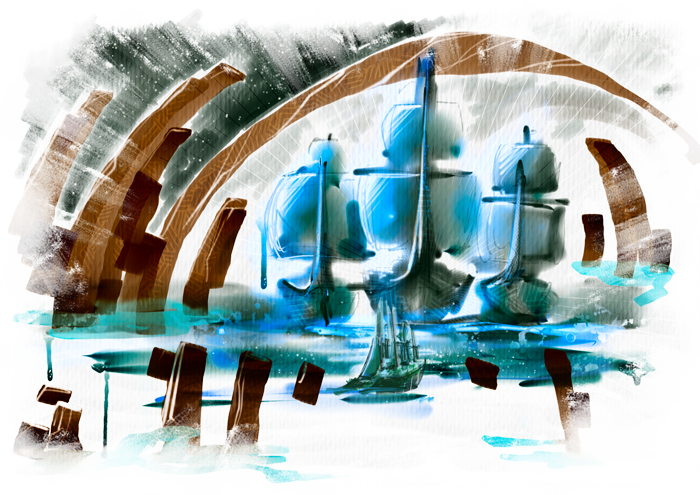 “Two crooked fangs that don’t go deep, where hidden reefs in shallows sleep,” Orion quoted to himself; a silly song he remembered from his old days, the one he had made up to memorize all the landmarks of the labyrinth easier.

That was the place. In three millennia it hadn’t changed one bit. Ages for living things are just brief moments to nature.

Two tall rocks surrounded by a group of smaller ones, with a narrow winding deep path and wide shallows between them. One turn, two, three… Sumah still followed. Fourth turn he missed.

With a deafening grinding sound accompanied by a chorus of curses from the crew, his black giant of a ship buried all three of her noses in the treacherous shallows between the rocky teeth.

With Black Manta stranded on the shallow bottom, the race was over. Uvel won and was going away. Not unscathed, unfortunately: it had caught a cannonball right into the unprotected rear of the right hull and dangerously tilted to the right side. The sailors were busy carrying everything heavy to the left hull now to restore the ship’s balance.

There was not a single sailor on the ship who wouldn’t cheer up. Even Ptarmika was smiling, the lady who had confessed in foreseeing her death recently. Kangassk was the only one who didn’t share the joy.

Random stuff: Internet is a lonely place. Please, leave me a comment. No registration needed.
Random stuff: After you've read the page, scroll down to see the comments :)
Random stuff: I wrote "Cold Obsidian" when I was 20. Translating it into English has been my dream since.
Random stuff: "Obsidian Trilogy" is the reason I decided to learn to draw. I was too poor to pay an artist but wanted my novels to have beautiful covers.
Random stuff: The biggest obstacle in translating my novels into English was poetry. The poems included in my stories couldn't be removed and I couldn't translate them. Without Alan Jackson' help, there wouldn't be the translation of OT. (English poetry is still a mystery to me).
Random stuff: There is a comment section below every chapter. Take a look :) Even when no one else comments there, I always do.
Random stuff: I update the site as soon as a new illustration is ready. If you want to binge-read the story, you can buy an ebook ($1) or join my Patreon.
Random stuff: All my books are on Goodreads. If you like them, please add them to your shelves.
Random stuff: The banners below the comment section belong to ComicAd (a network of indie creators). They can help you find more interesting things to read.
Random stuff: Obsidian Trilogy is currently my side project. My main progect is Gifts of wandering ice (a sci-fi webcomic 750+ pages long)
Random stuff: I didn't simply translate the novel into English, I rewrote and added a lot to make the story better. Can't help feeling proud.
Random stuff: A new reader? Or maybe a long-time lurker? Scroll down to the comments section and say hi! No registration needed.
Random stuff: Since Obsidian Trilogy is an illustrated story, you can both vote for it at TopWebComics and boost it at TopWebFiction (no registration needed). Either way, it's a huge help!
Random stuff: Every story begins with a spark: a small idea in the author's imagination. For "Cold Obsidian" it was a dream where a warrior woman was shopping for weapons and chose one made by an apprentice, not a master.
Random stuff: I wrote "Cold Obsidian" when I was 20 and rewrote it while I was translating it into English at the age of 36. Why rewrite it at all? Because there were too many scenes that made me exclaim: oh my! What was I thinking! It doesn't make sense at all! Scratch it!
Random stuff: The name Kangassk was inspired by Kangaxx. If you played Baldur's Gate 2, you've sure met that guy.
Random stuff: I made the first illustrations for "Cold Obsidian" by hand but later moved to Krita because drawing there was faster and easier.
Random stuff: I'm new to illustrating novels, so I'm experimenting a lot and would love to hear what you think of the different styles I'm testing.
26th Aug 2021, 2:09 PM

While they're at it, I'm trying a new illustration style. Digital watercolours and markers from Realistic Paint Studio (awesome little program, by the way).
Post a Comment
Comic Rocket ad exchange: