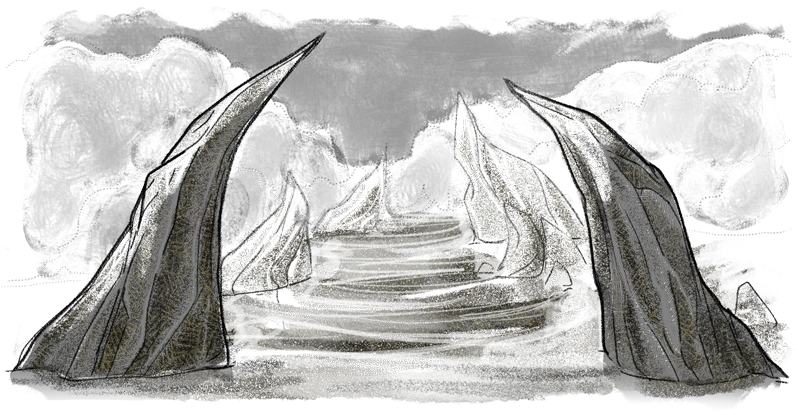 “You refused to meet me in Sigillan. Why?” asked Vlada, frowning.

In this world of tangerine sun, her hair was waist-long, tied in two elaborate braids with orange ribbons; she wore a shirt of orange silk and deep-blue trousers so loose that they resembled a long skirt. Vlada’s bare feet were pale against the bronze-coloured grass she was standing on. She looked like a rightful part of this world while her apprentice looked like a sad clown, so out of place his seaman’s garb was here.

“I couldn’t bring myself to visit Sigillan again,” Kan confessed. “Seeing it hurts too much… This world, though...” he looked around,“ it looks so warm and so peaceful! Is that why you wear no sword here?”

“Correct!” Vlada smiled and lifted her finger; she always did that gesture when a mere exclamation didn’t seem enough to her. “I came here to learn, Kan. To the worldholder that rules Sarenga, I am just a little clumsy child but, luckily, she doesn’t mind little clumsy children.”

“A child? But…” Kangassk shook his head and noticed that his hair was longer now and copper-coloured, not black anymore. Slowly, the tangerine light of Sarenga was changing his dreamwalking form! “But those maps on the walls in the Grey Tower: Omnis before and Omnis after your arrival… You returned the dead world to life! How is that not a serious accomplishment?”

“It is, it is.” Vlada waved her hand, signing him to calm down. “It’s like giving birth to a child, Kangassk: hard, painful, dangerous, yes. But what really matters is raising the child. Look at Omnis, look with your eyes wide open so no evil would elude your sight. And then look at Sarenga… They don’t even know swords here, Kan. They don’t need them. As well as other things we use to hurt people and to defend ourselves from being hurt by them. This is what I’m trying to learn here.

“I’m glad you joined me today. You are not a worldholder but you can learn a thing or two as well. I see that the world is affecting you already.”

A brightly-coloured creature with a long feathery tail hopped from one tree to another above their heads with a joyous shriek. It startled Kangassk. He looked around again, then at himself… Clad in orange and blue, velvet and silk, with his hair the colour of sunlit copper and his feet bare, Kan looked a proper Sarengan now. He felt different too. Vlada noticed that.

“You are no longer the helpless dreamwalking ghost I remember,” she said, a tinge of pride in her voice. “Can you recall your question now, the one you’ve been trying to ask me since Sigillan?”

“Yes...” Kangassk stopped, surprised by his own voice, so suddenly deep and low; the change had touched it as well. “Yes, I remember. I sense danger in Yga, master. It’s in motion; not yet happened but will soon... Orion and I are trying to get there as fast as possible. Where are you and Sereg where we need you so much? Can you get to Yga? Can you help us?”

They sat right there, on the bronze-coloured grass reddened by the gentle Sarengan sun. The world around them was full of life - sounds, smells, colours! - and so unlike Sigillan. Was this world just younger? Or was that world just ill? There was no way to tell and no time to ask…

“First, I’ll tell you where we are on our thief’s case.” Vlada made a pause and looked her apprentice in the eyes. What for? Most likely to make sure that Kan’s dreamwalking form was still at the same level of consciousness. It was. “The thief can’t be an ordinary human. Even a team of ordinary humans. They entered the Tower through Transvolo which is forbidden for human mages and even for Orion. They touched the Hora’s frame and lived. And then they left the Tower in a hurry - though the Chasm! No one goes into the Chasm, Kan. It’s that dangerous. Even for us.”

“No. But we have a lead now. You gave us a hint, back in Iven, when you made a wild guess that the vitryanik situation was a setup, a distraction, a well-played game to delay us and give the thief more time. We’ve found that you were right.”

“So you’ve caught the mage?”

“We are close. Every magical event leaves a trace. Every mage has a unique style. And this one’s style is very familiar. We know who he is. He won’t be able to hide any longer.”

“The South needs you now!” whispered Kan desperately. “I don’t know what will happen there but I swear that it’s big. Please, please go there, master, and take Sereg with you!”

“Big, you say?” Vlada gave him a curious look. “We are in the far North now. The only way to get to Yga quickly is to go through the Chasm. Should we risk our lives going there, Kangassk?”

There was a pause, a brief moment when the worldholders’ apprentice heard no sound but the throbbing of his own heart. The decision he had to make was that terrifying.

Vlada disappeared. Just like that. So this is how waking up looks from inside a dream: the dreamwalker just disappears.

Kangassk was alone under the tangerine sun now. The bright, noisy, restless alien world was bustling with life around him. His thoughts went back to Omnis all of a sudden and to Vlada’s words about it. She compared her creation to a poorly raised child! How sad and cruel was that! According to the Le’Rock legend, Omnis wasn’t even Kan’s native world but his heart went for it and his very soul rebelled against Vlada’s harsh judgement. He wanted to wake up and leave this perfect world behind for good. Just when he was about to do that, Vlada reappeared in front of him.

“We can’t come,” she said, her voice dark and hollow. “Someone has passed through the Chasm recently and disturbed it. Going there now would be suicide. We have to think of something else.”

“I must go back now!” Kangassk jumped to his feet. Waking up was not as easy as he thought it would be, though. Sarenga held him tightly no matter how hard he struggled. Back in Omnis, he was tossing and turning in his bed, maybe even talking or crying in his sleep.

“Stop it, Kan,” said Vlada in a soft, soothing voice and caught him by the hand. “What are you going to do? You will wake up in the middle of the night on the ship that you can’t make go any faster. Let your body rest instead. And let your mind learn. Come, I’ll show Sarenga to you.”

He froze. For a long, beautiful moment, he just stood there wishing that she would never let go of his hand. And she didn’t that night.

Through the fields of bronze grass and the orchards of golden fruit, through the winding streets of Sarengan cities and their noisy markets, Vlada led her adult apprentice by the hand like a child and told him stories about everything they saw.

Sarenga was one of those worlds that make dreamwalkers regret ever waking up in their homeworld again, so beautiful it is, so perfect, so happy and promising. A well-raised worldholder’s child. A world without a traumatizing past. A paradise.

Vlada warned Kan that he must stay focused and be prepared for the aftershock of waking up from Sarenga’s cruel tangerine beauty. Only then she let him go. With her best wishes and a kiss on the forehead.

Random stuff: Internet is a lonely place. Please, leave me a comment. No registration needed.
Random stuff: After you've read the page, scroll down to see the comments :)
Random stuff: I wrote "Cold Obsidian" when I was 20. Translating it into English has been my dream since.
Random stuff: "Obsidian Trilogy" is the reason I decided to learn to draw. I was too poor to pay an artist but wanted my novels to have beautiful covers.
Random stuff: The biggest obstacle in translating my novels into English was poetry. The poems included in my stories couldn't be removed and I couldn't translate them. Without Alan Jackson' help, there wouldn't be the translation of OT. (English poetry is still a mystery to me).
Random stuff: There is a comment section below every chapter. Take a look :) Even when no one else comments there, I always do.
Random stuff: I update the site as soon as a new illustration is ready. If you want to binge-read the story, you can buy an ebook ($1) or join my Patreon.
Random stuff: All my books are on Goodreads. If you like them, please add them to your shelves.
Random stuff: The banners below the comment section belong to ComicAd (a network of indie creators). They can help you find more interesting things to read.
Random stuff: Obsidian Trilogy is currently my side project. My main progect is Gifts of wandering ice (a sci-fi webcomic 750+ pages long)
Random stuff: I didn't simply translate the novel into English, I rewrote and added a lot to make the story better. Can't help feeling proud.
Random stuff: A new reader? Or maybe a long-time lurker? Scroll down to the comments section and say hi! No registration needed.
Random stuff: Since Obsidian Trilogy is an illustrated story, you can both vote for it at TopWebComics and boost it at TopWebFiction (no registration needed). Either way, it's a huge help!
Random stuff: Every story begins with a spark: a small idea in the author's imagination. For "Cold Obsidian" it was a dream where a warrior woman was shopping for weapons and chose one made by an apprentice, not a master.
Random stuff: I wrote "Cold Obsidian" when I was 20 and rewrote it while I was translating it into English at the age of 36. Why rewrite it at all? Because there were too many scenes that made me exclaim: oh my! What was I thinking! It doesn't make sense at all! Scratch it!
Random stuff: The name Kangassk was inspired by Kangaxx. If you played Baldur's Gate 2, you've sure met that guy.
Random stuff: I made the first illustrations for "Cold Obsidian" by hand but later moved to Krita because drawing there was faster and easier.
Random stuff: I'm new to illustrating novels, so I'm experimenting a lot and would love to hear what you think of the different styles I'm testing.
15th Aug 2021, 6:17 PM in Book 1. COLD OBSIDIAN

A new chapter begins with another dreamwalk and a motherly kiss. Then we'll go back to the ship, seasickness, and peppermint bars. Pirates probably too.
Post a Comment
Comic Rocket ad exchange: