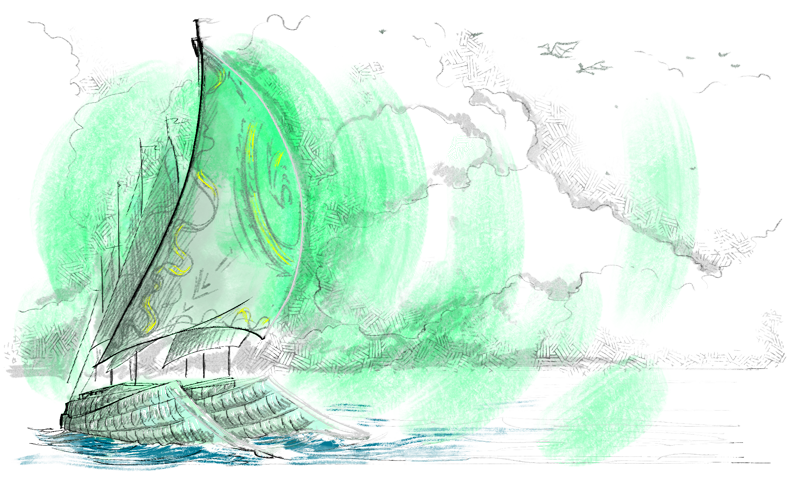 “Here you are, Orion the son of stars…” said the captain through the acrid zigarella smoke. She smoked two of them at once; the nasty habit had made her teeth coal-black.

Emerald dragons, big and small, were painted all over the captain’s leather jerkin. Her crew’s clothes bore the same patterns, just more plainly made. The idea of liking dragons so much seemed weird to Kangassk. The dragons’ being emerald-green perplexed him as well. Where do those creatures even live? The only dragons he had ever seen were as yellow as Kuldaganian dunes and nowhere as elegant as the slender symbols of Uvel.

He wanted to ask someone to explain the meaning of the dragon symbolism to him but it wasn’t the right place and time for such an idle question. 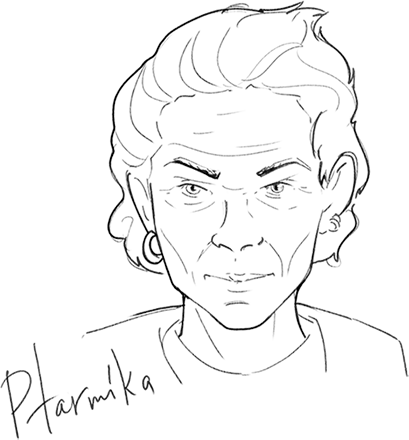 Captain Ptarmika was old and grey-haired. When she stood beside Orion, it was hard to believe that he was an old man here and she was a little girl… Humans never have enough time to grow up, yeah.

What was she thinking now, looking in the eyes of the legendary ancient pirate? Even the cold obsidian would not tell…

“My grandson says you want no money for your services.” Captain gave Orion a suspicious look.

“That’s right,” he nodded. “My friend and I are not after money but after speed, this is why I chose your ship. We must get to the Southern port as soon as possible. My Transvolo, your ship - and we’re square. Deal?”

“Deal,” was her answer, cold and dry. “But if it comes to battle, you fight alongside us! Don’t even think of hiding in your cabin!”

“Good. Then do your thing, mage. How long do you need to get us away from here?”

The sight was mesmerizingly beautiful: the emerald ship floating through the darkness full of twinkling stars, the stars shining for the worlds no human being ever visited…

The sailors froze on the deck, agape, in awe and horror merged in one. The captain’s face was impenetrable, a carved stone devoid of emotion, enveloped in wispy smoke, and… glistening with tears - just two narrow strokes on her cheeks; nothing else betrayed how she felt.

The starry moment was brief; soon, the emerald di-catamaran was in the sea again and that sea was not a still mirror anymore. It took Uvel’s crew some time to shake off the enchantment, though. For a while, they kept staring blankly, afraid to move, barely breathing. The captain was the first to wake up.

“Get to work!” Ptarmika’s voice was like a crack of a whip to the crew. All miracles in the world forgotten, they hurried to their places.

“We’ll get there in time,” said Orion reassuringly and made a long, deep breath, taking it all in: the endless sea, the sounds of the ship, the memories of his old days.

Kangassk didn’t share his friend’s delight. He didn’t find the sea to be nice at all. Seasickness is no fun.

The day dragged along, torturous, endless. Kan managed to skip a part of it by staying in his cabin but then there came a moment when he could sleep no more. Then he dragged his groggy self on the deck to get some fresh air. The fresh air didn’t help much.

Orion found him bent double over the railing.

“Feeling seasick?” he asked, nothing but compassion in his voice.

Kangassk turned to his friend, startled. It was Orion the Grey Tower’s keeper again, calm and wise; that air of reckless audacity, common for dragons and pirates, was no longer about him. His eyes were dark amber; no hidden passions flickered in them now.

“Alas, it’s pretty common. But worry not, Kan,” Orion smiled, trying to cheer him up, “for many famous captains had the same problem you have and it didn’t stop them from being the heroes of their time! To tell the truth, I’m not perfect there myself…” he coughed in a comically hinting manner.

“You?” Kangassk did find it funny; a weak smile touched his lips.

“Yes, I am, Orion the old pirate,” quietly laughed the son of stars. “But few people ever noticed. I have a trick up my sleeve, you know. Here, take this.”

Orion handed Kan a thick bar of something dark-green. Tobacco?

“A bar of pressed peppermint,” explained Orion. “Anyone asks you stupid questions - tell them it’s tobacco. When magic is not an option, chewing peppermint is the best way to get over seasickness. And to prevent scurvy.”

Kangassk took a small bite of his peppermint bar. He liked the strange spice right away when he felt its delicate aroma in his nose and a cooling sensation on his tongue. His head began clearing up, as if by magic.

Orion gave the endless sea a long, thoughtful look. Sunny and quiet, it seemed safe and cheerful all around.

“I missed the sea.” The sadness in his voice was as obvious as an open wound. “I’ve been restless since I stepped on the marble stairs of Adjaen.”

“So many memories… From here, Grey Tower looks like a prison cell. A well-deserved prison cell, though.”

Random stuff: Internet is a lonely place. Please, leave me a comment. No registration needed.
Random stuff: After you've read the page, scroll down to see the comments :)
Random stuff: I wrote "Cold Obsidian" when I was 20. Translating it into English has been my dream since.
Random stuff: "Obsidian Trilogy" is the reason I decided to learn to draw. I was too poor to pay an artist but wanted my novels to have beautiful covers.
Random stuff: The biggest obstacle in translating my novels into English was poetry. The poems included in my stories couldn't be removed and I couldn't translate them. Without Alan Jackson' help, there wouldn't be the translation of OT. (English poetry is still a mystery to me).
Random stuff: There is a comment section below every chapter. Take a look :) Even when no one else comments there, I always do.
Random stuff: I update the site as soon as a new illustration is ready. If you want to binge-read the story, you can buy an ebook ($1) or join my Patreon.
Random stuff: All my books are on Goodreads. If you like them, please add them to your shelves.
Random stuff: The banners below the comment section belong to ComicAd (a network of indie creators). They can help you find more interesting things to read.
Random stuff: Obsidian Trilogy is currently my side project. My main progect is Gifts of wandering ice (a sci-fi webcomic 750+ pages long)
Random stuff: I didn't simply translate the novel into English, I rewrote and added a lot to make the story better. Can't help feeling proud.
Random stuff: A new reader? Or maybe a long-time lurker? Scroll down to the comments section and say hi! No registration needed.
Random stuff: Since Obsidian Trilogy is an illustrated story, you can both vote for it at TopWebComics and boost it at TopWebFiction (no registration needed). Either way, it's a huge help!
Random stuff: Every story begins with a spark: a small idea in the author's imagination. For "Cold Obsidian" it was a dream where a warrior woman was shopping for weapons and chose one made by an apprentice, not a master.
Random stuff: I wrote "Cold Obsidian" when I was 20 and rewrote it while I was translating it into English at the age of 36. Why rewrite it at all? Because there were too many scenes that made me exclaim: oh my! What was I thinking! It doesn't make sense at all! Scratch it!
Random stuff: The name Kangassk was inspired by Kangaxx. If you played Baldur's Gate 2, you've sure met that guy.
Random stuff: I made the first illustrations for "Cold Obsidian" by hand but later moved to Krita because drawing there was faster and easier.
Random stuff: I'm new to illustrating novels, so I'm experimenting a lot and would love to hear what you think of the different styles I'm testing.
1st Aug 2021, 4:24 PM in Book 1. COLD OBSIDIAN

For some people, seasickness always spoils all the fun, be it a long sea voyage or a short car trip. Kan is in the same boat with me here. Unlucky, both of us.
Post a Comment
Comic Rocket ad exchange: